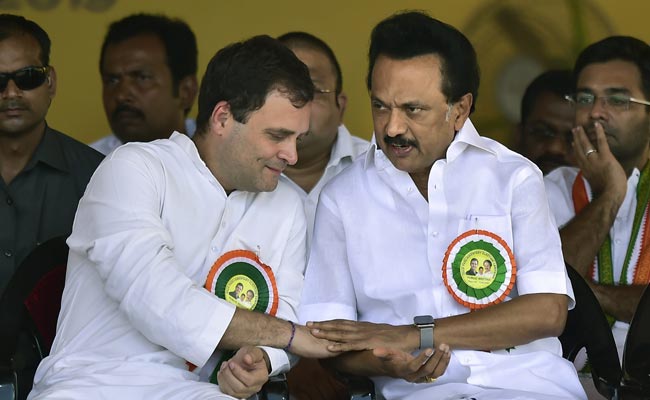 DMK chief MK Stalin turned peacemaker today, urging his party and the Congress to avoid airing differences in public forums and cautioning his ally against offering common enemies the opportunity to "see cracks in the DMK-Congress alliance". Mr Stalin's comments come just days after a colleague claimed the party would "not (be) bothered at all" if the Congress were to exit an alliance that romped to a massive win in last year's Lok Sabha elections.

Prior those comments relations between the two parties were already strained because of disagreements over local body elections in Tamil Nadu.

"Congress's statement made the issue public... led to unpleasant exchanges on both sides. I don't want to give fodder to forces waiting to see cracks in DMK-Congress alliance," MK Stalin said today, as he tries to keep both parties pulling in the same direction ahead of Assembly elections next year.

"In the case of difference of opinion, it has been decided that the TNCC and DMK presidents will resolve it and other leaders from both the parties need not air their views," Mr Alagiri was quoted as saying by news agency PTI, adding that both parties remained committed to the alliance's success.

The rift between the two parties went public after Mr Alagiri hit out at Mr Stalin over power-sharing after panchayat election results earlier this month. The Congress was not allocated a smaller number of leadership posts in district panchayat and panchayat unions.

An upset DMK then boycotted a meeting of opposition parties in Delhi that was called by Congress chief Sonia Gandhi. DMK leader TR Baalu, a Lok Sabha MP, confirmed that his party had withdrawn because "our chief was accused of violating coalition dharma".

The DMK's backlash didn't stop there. On Wednesday Durai Murugan, the MLA from Katpadi Assembly constituency, reacted sharply, saying: "If they leave the alliance, let them go. What is the harm? We are not bothered if the Congress goes out of the alliance".

The sparring between the two parties was an unexpected development, especially as Mr Stalin was a vocal supporter of a Congress-led coalition at the centre with Rahul Gandhi as Prime Minister.

The DMK-Congress alliance romped to a massive win in Lok Sabha polls held early last year, winning 37 of 38 seats. The ruling AIADMK, which has allied with the BJP, won just a single seat. However, the party gained revenge in October by winning by-polls for two Assembly seats; both held by the DMK.