Class X student trampled to death by an elephant 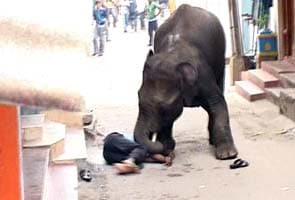 Nilgiris: Tamil Nadu chief minister J Jayalalithaa has announced a compensation of Rs 3 lakh for the family of a class 10 student was trampled to death by an elephant in Tamil Nadu's Nilgiris district on Thursday morning.

His father, who was also trampled by the elephant, is battling for his life. The chief minister has also sanctioned Rs 30,000 for him.

According to police, 16-year-old Arun came out of his house to attend nature's call, when the roaming elephant first gored him and then trampled him to death. His father, who rushed out of his house hearing the noise, was also trampled by the elephant. He is now being treated at a hospital with serious injuries.

Promoted
Listen to the latest songs, only on JioSaavn.com
Malavan Serampadi is a forest area which off late has become notorious for elephants encroaching into human inhabitation. Police say, this is the fourth such incident over the last seven months.