A water crisis is brewing in many parts of India as unsustainable use and few measures to harness rain lead to shortages. 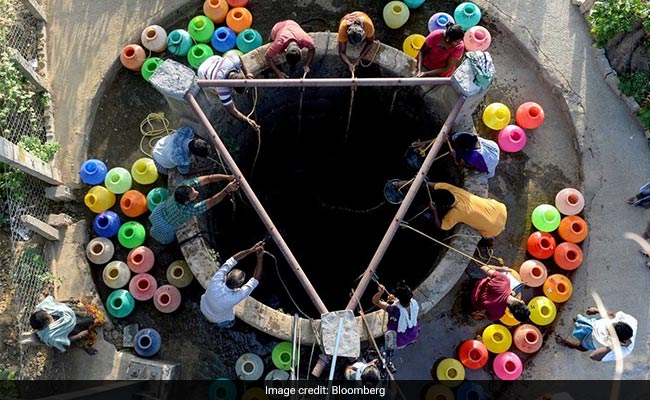 Chennai received the lowest rainfall in 15 years in 2018.

Chennai, the capital of Tamil Nadu that's reeling under a severe water shortage, will get the resource transported from other parts of the state even as a provincial minister performed a ceremony appealing to Lord Shiva for rain.

The city, gateway to the factories of Hyundai Motor Co. and Ford Motor Co., will get 10 million litres transported from other parts of the state daily, the government said in a statement. Meanwhile D. Jayakumar, the state's fisheries minister and a leader of its ruling All India Anna Dravida Munnetra Kazhagam party, participated in a Hindu ritual called yagna -- where symbolic offerings are made to fire -- invoking Shiva to deliver rain, said N. Balaganga, a party district secretary.

A water crisis is brewing in many parts of the world's second-most populated nation as unsustainable use and few measures to harness rain lead to shortages. Tamil Nadu and Maharashtra, two biggest contributors to India's $2.7 trillion economy, are among the worst affected. Monsoon rainfall, which accounts for 70% of the nation's annual rainfall, has been 38% below normal as of Sunday. Poor rain may make it tougher for Prime Minister Narendra Modi to revive growth that has slumped to a five-year-low.

"The city has neglected all its water bodies and efforts to improve and recharge in the past decade," said Sunita Narain, director general of the New Delhi-based Centre for Science and Environment. "Water crisis will be here to stay if we don't understand the need to save every drop of water and rain."

Chennai received the lowest rainfall in 15 years in 2018. The poor rainfall didn't stop indiscriminate use of water from the city's four reservoirs, which has contributed to a crunch this year, said Jyoti Sharma, who heads a non-profit working to conserve water. The city's reservoirs have less than 1% of capacity as on Monday, that compares with 20% a year earlier, according to data on the Chennai Metropolitan Water Supply & Sewerage Board. A fight over water led to a man attacking a woman in Chennai, while another man was killed for objecting to attempts by his neighbor to store a large quantity, the Indian Expressreported last week. More than 20,000 employees working in technology firms have been asked to either work from home or move to offices in neighboring states, the Hindustan Times newspaper reported, citing T. Bharanidharan, president of the IT Employees Association.

Meanwhile residents in Chennai are looking for ways to conserve water. Cognizant Technology Solutions Corp. has installed special nozzles in washbasin taps that lowers water consumption by 80%, the company said in a statement. Hyundai Motor is asking its customers to "dry wash" cars, while restaurants are serving food in plantain leaves to avoid having to wash utensils.

The government has provided Renault-Nissan BV's plant with pumping systems from nearby open wells to be used in an emergency, the company said in a statement. Infosys Ltd. said it has cut all non-essential services.

India isn't the only country facing a water crisis. Africa's booming cities are running out of the essential resource and 2 billion people now live in countries experiencing high water stress, the United Nations said in its World Water Development Report in March. Recognizing the urgent need -- and the opportunity - PM Modi has made an ambitious pledge to bring piped water to every rural household in India by 2024, when he would face re-election once again.