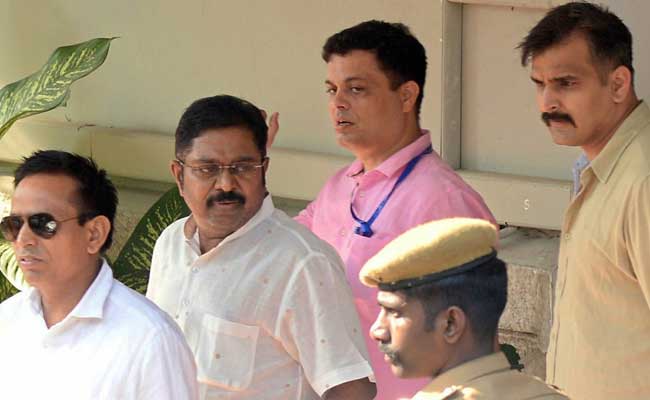 The police have sent Mr Dinakaran and Mr Chandrasekhar's phones for forensic analysis.

According to sources, Mr Chandrasekhar's lawyer, Gopinath, was present in the hotel when the former was arrested. He was questioned to ascertain whether he was aware about the deal between Mr Chandrasekhar and Mr Dinakaran.

Mr Pulkit, an alleged hawala operator, was also questioned to ascertain his role in the money trail from Chennai to Delhi, they said.

The police have sent Mr Dinakaran and Mr Chandrasekhar's phones for forensic analysis.

The AIADMK (Amma) leader had told the police that the phone he used to communicate with Mr Chandrasekhar got broken.

His other phone has been sent for forensic examination. Last evening, the Delhi Police's Crime Branch team, along with arrested Mr Dinakaran and his aide Mr Mallikarjuna, returned to the national capital after finishing their Chennai leg of probe into the case.

During their probe in Chennai, the Delhi Police questioned several suspects and conducted searches at the residences of Mr Dinakaran and his friend Mr Mallikarjuna.

Mr Naresh, the alleged hawala trader who was arrested, was also questioned. On the basis of today's questioning and the leads they have got so far, the police will decide whether they will push for extension of the police custody of Mr Dinakaran, Mr Naresh and Mr Mallikarjuna.

The trio's police custody ended today and the matter will come up for hearing tomorrow.

While in Chennai, the Delhi Police had questioned about a dozen people in connection with the case. The persons who were questioned include those who were suspected to have been linked to the money trail in the bribery case and others who had knowledge about the transaction.

Mr Dinakaran was arrested on April 25 in Delhi following four days of questioning for allegedly attempting to bribe an unidentified EC official to get the undivided AIADMK's 'two leaves' election symbol for his faction.

The police had earlier arrested Sukesh Chandrasekhar, who had allegedly struck a deal for Rs 50 crore to help the AIADMK (Amma) faction keep the two leaves symbol and seized Rs 1.30 crore from him.