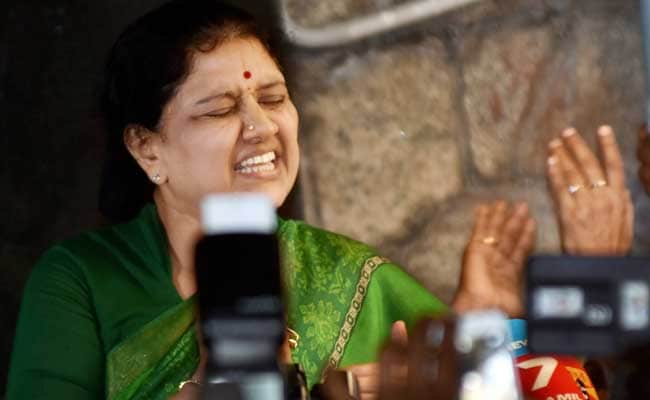 Chennai: After she was found guilty by the Supreme Court for corruption, VK Sasikala, who has been ordered to serve a four-year sentence, took care of some important business for her party, the AIADMK, which governs Tamil Nadu. At a meeting presided by her, the party picked a new leader, minister Edappadi K.Palanisamy, who is trusted by her.  The gathering also expelled O Panneerselvam, known as OPS, from the party for serving up a high-velocity crisis by refusing to quit as Chief Minister.

Ms Sasikala is to be collected by the police from Golden Bay Resort, a luxury hotel on the outskirts of Chennai, which has, for a week, morphed into the headquarters of the AIADMK, which used the sprawling compound to rope off about 125 MLAs or state legislators and keep them from abandoning the party. The few who left - two have talked of "escape"- were welcomed on the other side by OPS, who has upended a record of benign leadership and obedience to challenge his party for the state's top job.

On February 5, the AIADMK said Ms Sasikala was to take over as Chief Minister to complete the transfer of power to her from J Jayalalithaa, who died in December while still in office. For decades, Ms Jayalalithaa was the authoritarian and unilateral decision-maker of the AIADMK, impervious to feedback and intolerant of dissent. Her inviolable control of the AIADMK was key to its psyche; her charisma and large welfare schemes for the poor earned her religious - like devotion among lakhs of supporters to whom she was, simply, "Amma" (mother). And as her live-in aide, treated as her next of kin, Ms Sasikala found it easy to appropriate charge of the party after Ms Jayalalithaa died.

First, Ms Sasikala was named General Secretary- the top position within the AIADMK, held for two decades by Ms Jayalalithaa. Then, she was named for promotion to Chief Minister. But a pending case of corruption, pivoted on Ms Jayalalithaa and extending to her, turned into a speeding ticket as she tried to accelerate her promotion.

Promoted
Listen to the latest songs, only on JioSaavn.com
The Supreme Court announced that it would declare its verdict in the case this week. Experts warned that the AIADMK should wait for the decision before placing Ms Sasikala as head of state. OPS launched his stealth attack, declaring, after a 40-minute meditation session at Amma's grave that he would not surrender his job. Crowd-sourced anger over Ms Sasikala's plans raged online, demanding a stop to the ascension of a woman who has no political chops and whose family members are laced with an array of corruption charges. While Ms Sasikala waited for Governor C Vidyasagar Rao to invite her to prove her majority, OPS started winning the support of some party members - he now has 10 MLAs and 12 MPs rallying behind him.

Today's verdict against Ms Sasikala dates to Ms Jayalalithaa's first term as Chief Minister - the women were accused of profiting from the public office and collecting assets worth 64 crores that did not match with their declared sources of income. The illicit shared wealth included bungalows, luxury cars, tea estates, eight tons of silver, nearly 30 kilogrammes of gold and thousands of saris.