At a temple in Tamil Nadu's Madurai city, seven girls decked up like goddesses, with only jewellery to cover their chest, spend 15 days in the care of a male priest as part of the ritual.

As part of ritual, young girls are forced to live bare-chested at a temple in Tamil Nadu's Madurai

Madurai: Young girls forced to live bare-chested at a temple in Tamil Nadu's Madurai as part of a bizarre ritual have been spared more indignity after the administration ordered today that they must be allowed to cover their bodies.

Seven girls decked up like goddesses, with only jewellery to cover their chest, spend 15 days in the care of a male priest as part of the annual ritual. Only girls who haven't reached puberty are sent to the temple.

"It is an ancient custom. Parents send their girls voluntarily," said Madurai collector K Veera Raghava Rao, who ordered clothes for the girls to ensure they were not harassed or abused. 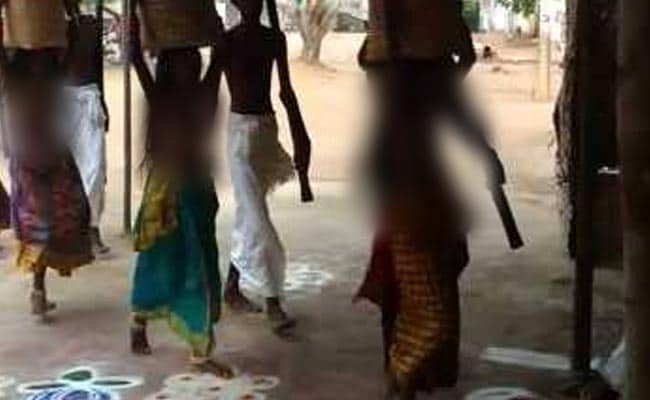 At Madurai temple, 7 girls decked up like goddesses spend 15 days in care of a priest.

"We informed the villages that the girls have to be properly clothed. They can wear jewellery over their clothes," he added.

Mr Rao asserted, however, that a team of officials investigated and found no abuse of children at the temple. ""They treat them as goddesses," he said.

Promoted
Listen to the latest songs, only on JioSaavn.com
More than 60 villages that participate in the ritual worship the girls like goddesses. The Collector has instructed these communities to ensure that the girls are fully covered. "This can't be allowed in this age. This will haunt children psychologically in future. Some may forget some may not.  In this age of child  abuse, they can have the ritual but with clothes on," said Ramya Sriram, a child rights activist.

A video recorded by online portal The Covai Post reveals bare chested girls walking into the temple with offerings. Another show the girls playfully taking a shower taking water from a small tank inside the temple area.