The agency's notice and investigation against the 58-year-old Amma Makkal Munnetra Kazhagam (AMMK) leader came after it recently arrested jailed 'conman' and another accused in this case, Sukesh Chandrashekhar. 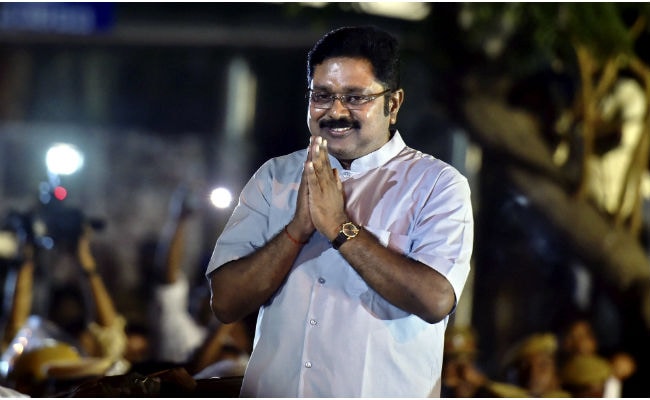 The first time, TTV Dhinakaran was grilled by the Enforcement Directorate for about 8 hours

AMMK leader TTV Dhinakaran today appeared before probe agency Enforcement Directorate in Delhi for the second time for questioning in a money laundering case linked to the alleged bribing of Election Commission officials to get the AIADMK's 'two leaves' symbol for the VK Sasikala faction, officials said.

The agency will continue recording his statement under the Prevention of Money Laundering Act (PMLA), they said.

The first time, Mr Dhinakaran was grilled by the Enforcement Directorate for about eight hours at its office in Delhi on April 12.

The agency issued fresh summons to him last week.

The agency's notice and investigation against the 58-year-old Amma Makkal Munnetra Kazhagam (AMMK) leader came after it recently arrested jailed 'conman' and another accused in this case, Sukesh Chandrashekhar.

While exiting the Enforcement Directorate office late at night on April 12, Dhinakaran told reporters that he cooperated with the agency and replied to their questions in the Sukesh Chandrashekhar case.

Mr Chandrashekhar was also grilled by the agency in the case over the last week.

The Enforcement Directorate case under the criminal provisions of the PMLA is based on the primary FIR filed against the accused by the Delhi Police Crime Branch in 2017.

Both Mr Dhinakaran and Sukesh Chandrashekhar were arrested by the Crime Branch then.

Sukesh Chandrashekar was arrested in April 2017 from a five-star hotel by the Delhi Police for allegedly taking money from TTV Dhinakaran to bribe Election Commission officials to get the AIADMK's 'two leaves' symbol for the VK Sasikala faction in a by-election to the RK Nagar Assembly seat in Tamil Nadu.

Mr Dhinakaran, who has been charged by the police, was arrested by the Delhi Police after four days of questioning for allegedly attempting to bribe EC officials for the party symbol.

The bypoll was necessitated by the death of former Tamil Nadu chief minister J Jayalalithaa, who represented the Assembly seat.

The Election Commission had frozen the AIADMK's symbol after the two factions - one led by Mr Dhinakaran's aunt VK Sasikala and the other by former Chief Minister O Panneerselvam - staked claim to it.

Mr Dhinakaran's close aide Mallikarjuna was also arrested for allegedly facilitating a Rs 50-crore deal between him and Sukesh Chandrashekar.

Mr Dhinakaran was the deputy general secretary of the All India Anna Dravida Munnetra Kazhagam (AIADMK) and was expelled from the party in August 2017 along with Jayalalithaa's confidante VK Sasikala.