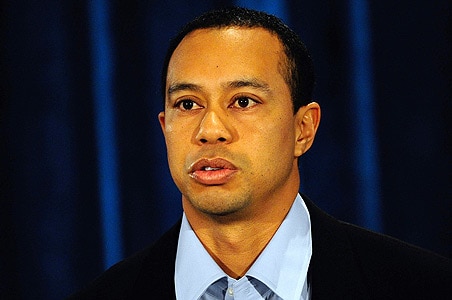 Los Angeles: Timeline of the scandal involving Tiger Woods, who announced on Tuesday he would make his return to golf at next month's Masters tournament:

Woods suffers facial lacerations in a car crash outside his Florida home after colliding with a fire hydrant and a tree.

Florida Highway Patrol say they have been unable to speak to Woods and his wife, Elin Nordegren.

"I'm human and I'm not perfect," he says on website. "Many false and malicious rumors circulating about my family and me are irresponsible."

Woods pulls out of his own tournament, the Chevron World Challenge, in California. Florida Highway Patrol say they have yet to get his version of crash.

Police issue Woods a traffic citation for careless driving and a 164-dollar fine; say "there are no claims of domestic violence by any individual."

Cocktail waitress Jaimee Grubbs claims she had a two-and-a-half-year affair with Woods, who says via website: "I have let my family down and I regret those transgressions with all of my heart."

Woods' mother-in-law, Barbro Holmberg, is rushed to hospital from Woods' home, but is later discharged.

Cocktail waitress Jamie Jungers claims she was "broken-hearted" after alleged relationship with Woods.

Woods says via website he will take an "indefinite break" from golf and apologizes for "infidelity."

Consulting firm Accenture ends six-year sponsorship of Woods, saying he is "no longer the right representative for its advertising." Other sponsors including Nike and Tag Heuer stick with Woods.

US telecom giant AT&T ends sponsorship deal with Woods, saying only that they "wish him well in the future."

Video game maker Electronic Arts Incorporated announces it will go ahead with plans to roll out an online game featuring Woods.

Woods is reported to be receiving treatment for sexual addiction at a clinic in Hattiesburg, Mississippi.

Woods makes first appearance since the scandal broke, apologizing for "selfish and irresponsible" behavior in a statement televised around the world.

Promoted
Listen to the latest songs, only on JioSaavn.com
Woods announces that he will begin his 2010 season at the Masters from April 8-11 at Augusta National Golf Club, the year's first major championship.