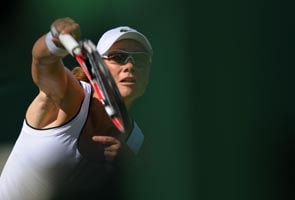 Brisbane: Australia's top seed Samantha Stosur overcame a sluggish start to power into the second round of the Brisbane International, with a 7-6 (7/1), 6-1 win over Czech qualifier Lucie Hradecka on Monday.

Playing in front of a capacity home crowd at the Pat Rafter Arena, Stosur appeared nervous as she dropped her opening service game to her 25-year-old opponent.

The big-serving Hradecka held the advantage for most of the first set, but faltered when serving at 5-4 and Stosur broke back, then held serve to take the set into a tiebreak.

Stosur, who reached the French Open final in 2010 on her way to a career-high singles ranking of five, raced through the tiebreak to crush Hradecka in the second set, winning their first-round match in 86 minutes.

Stosur admitted that five years ago she would have struggled to recover from such a poor start, but said she was now playing with more self-belief than before.

"I was really pleased with the way I was able to claw my way back," she said.

"One of the main reasons I was able to do that was because I didn't panic and start freaking out and thinking I had to play unbelievable to try and get back."

Despite appearing to suffer from the heat and humidity, Peer brushed aside the 24-year-old Australian 6-4, 6-2 to set up a second-round clash against Lucie Safarova of the Czech Republic.

Bartoli, who reached the final here in 2009, was also impressive in her 6-1, 6-2 demolition of US qualifier Vania King in just 61 minutes.

However, Petrova was outplayed by Kvitova to lose in the first round for the second year in a row following her exit at the hands of Justine Henin in 2010.

Russia's Ksenia Pervak, who lost in qualifying but came into the tournament as a late replacement for injured Daniela Hantuchova, took full advantage of her second chance when she beat fellow countrywoman Anna Chakvetadze 6-2, 6-2.

Promoted
Listen to the latest songs, only on JioSaavn.com
Other winners included Slovakian Dominika Cibulkova, a 6-3, 6-0 winner over Italy's Sara Errani and Andrea Petkovic of Germany, who ousted eighth seeded Romanian Alexandra Dulgheru 6-3, 6-0.