Somdev in last eight, Rastogi out of Singapore ATP Challenger 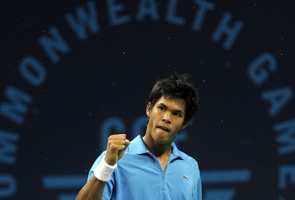 Singapore: Top seeded Somdev Devvarman registered a comfortable straight set victory over Australian John Millman to enter into the quarterfinals of the Singapore ATP Challenger, while Karan Rastogi bowed out of the event after losing to Russia's Dmitry Tursonov in the second round.

Somdev played some intelligent tennis to outplay his opponent 6-4, 6-3 in just one and a half hours at the Kallang tennis centre, here.

During the course of the match, Somdev hit five aces and got 71 per cent of first serves right against the 203rd ranked Australian Millman.

In the first set, Somdev broke Millman once in the third game, while in the second set he broke his opponent twice --first in the third and then in the ninth game.

Somdev will take on eighth seeded and 169th ranked Andrej Martin of Slovakia in the quarterfinal match to be played tomorrow.

Meanwhile, former world No 20 Tursonov proved too strong for wildcard entrant 332nd ranked Rastogi, as he got the better of the Indian 6-4, 6-2 in one hour and six minutes.

Rastogi, who also lost in the doubles on Wednesday, earned eight ATP points for his effort.

In the biggest upset of the day, Singaporean born American wildcard entrant Michael Yani, returning back to his country after 22 years, knocked out third seeded and 140th ranked Italian Paolo Lorenzi to make it to the last eight stage.

In another match, American-Indian Rajiv Ram saved seven match points and fired 14 aces before going down to sixth seeded Czech player Lukas Rosol 7-5, 4-6, 7-6(6) in a match lasting 2 hours and 48 minutes.