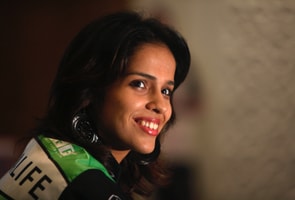 New Delhi: Ace Indian shuttler Saina Nehwal on Monday received the Rajiv Gandhi Khel Ratna award from Sports Minister M S Gill after missing out on the August 29 ceremony at the Rashtrapati Bhawan due to the World Championships in Paris.

"Dr M S Gill, Union Minister for Youth Affairs and Sports, gave away Rajiv Gandhi Khel Ratna Award for the year 2010 to Ms Saina Nehwal at a simple ceremony on Monday," the Sports Ministry said in a statement.

"As she was in Paris taking part in World Championship when the National Sports Awards were conferred by the President of India on August 29, she could not receive the Award on that occasion. In view of this, the Award was conferred on her," it added.

The award carries a medal, citation and cash prize of Rs 7.5 lakh.

She had won the Indonesia Super Series and the Indian Open Grand Prix last year.

Promoted
Listen to the latest songs, only on JioSaavn.com
The Hyderabadi was a semifinalist in last year's World Championship and in the All England Super Series this year.

She won the women's singles gold medal in Commonwealth Games last month. She was conferred the Arjuna Award last year.