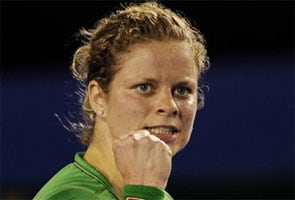 Belgium's Kim Clijsters came from a set down to beat Li Na 3-6, 6-3, 6-3 and win her maiden Australian Open title on Saturday, dashing Chinese hopes of a first ever Grand Slam win.

After a shaky first set, three-time US Open-winner Clijsters fought her way back in a thrilling final in front of 15,000 fans at Rod Laver Arena, including a vocal Chinese contingent.

"I finally feel like you guys can call me 'Aussie Kim' because I won the title," Clijsters told her Australian fans, who gave her the nickname when she was engaged to Lleyton Hewitt.

The 27-year-old Clijsters claimed her fourth Grand Slam title, and her third since ending a long career break to give birth to her daughter, Jada. She is now considering scaling back her schedule again.

Clijsters went into the tournament as the firm favourite but was made to battle all the way by Li, who was hoping to complete her own fairytale by becoming the first Chinese -- or Asian -- player to win a Grand Slam.

"Li and I have played some amazing matches over a number of years -- she's a tough competitor," Clijsters said. "It's been a great effort for her these part two weeks and I hope we can play many more Grand Slam finals in the future."

Li had been on the front cover of many of China's major newspapers as the world's most populous nation looked to the 28-year-old from Wuhan to create a piece of tennis history.

But despite looking the likely winner in the first set, Li faded in the third and became increasingly agitated as the match slipped away, complaining about comments and flash photography from the crowd.

"Tell the Chinese (fans), don't teach me how to play tennis," she fumed to the chair umpire, after being broken in the second set.

Clijsters had opened in fine style as she won the first eight points of the match, but once Li settled down and found her range with her dominant groundstokes, and her forehand in particular, she steadily took control.

She broke Clijsters three times in the first set as she repeatedly forced her opponent onto the defensive with the power and accuracy of her shots.

Clijsters tried to stay with her but whenever the pair went toe-to-toe from the baseline, Li invariably came out on top.

"(The first set) was going too fast for me," Clijsters said. "She was doing everything so well, she was hitting both sides, forehand and backhand, and she was serving well."

But after convincingly winning the first set, Li began to struggle on serve and Clijsters took her chance to drag her way back, changing tactics by taking much of the pace off the ball.

Li tried to counter by hitting harder, but only succeeded in increasing her error count and handing Clijsters cheap points.

"I tried to serve a bit better, slow it down and put spin on it, and I tried to loop a few balls," Clijsters said. "She missed some of them and I saw that made her nervous."

The Belgian broke Li four times in the second set and twice in the third to wrap up a tense final in 2hr 5min, immediately bursting into tears as she realised what she had achieved.

Meanwhile Li, 28, was satisfied with becoming the first player from China to reach a major singles final, which made her an overnight superstar and saw her compared to idolised basketball player Yao Ming and hurdler Liu Xiang.

"It doesn't matter if I won or lost today," Li said. "I played my best tennis."

Li, whose tales of her husband's snoring and her shopping sprees have delighted fans in Australia, also reached last year's Australian Open semi-final before being beaten by eventual winner Serena Williams.