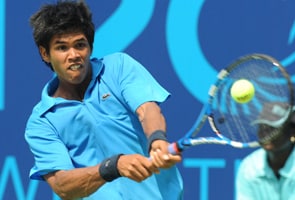 Chennai: The Indian challenge in the singles event at the Aircel Chennai Open ended on Tuesday as country's No. 1 singles player Somdev Devvarman crashed out in the opening round losing to Belgian qualifier David Goffin in straight sets.

Goffin, playing his first ever ATP Tour match thrashed 6-2, 6-4 to win in only 86 minutes to take on last year's runner-up Stanislaus Wawrinka (third seed) in the second round. Wawrinka tamed Somdev's fellow Davis Cupper Rohan Bopanna 6-4, 6-4 in another straight-set victory.

The other Indian wild card entrant in singles Yuki Bhambri also crashed out losing his opening round losing 2-6 1-6 to Russia's Alexandre Kudryatsev, making it a disappointing day for the home crowd.

In late night singles matches, eighth seeded Robin Haase of the Netherlands came from behind to get the better of Frank Dancevic 6-7 (6) 6-4 6-4, while Colombia's Alejandro Falla defeated Portugal's Rui Machado 7-5 6-3.

The day's focus was on the centre court where 25-year-old Devvarman, making his third straight tournament appearance, was not given any room by the unknown Belgian in the first set.

Goffin, ranked 228th in the world had a better percentage of service returns as he held the advantage against Devvarman, known for his aggressive tennis.

Devvarman, ranked 106 after having reached a career high of 94 last October, didn't play to his potential and it helped Belgian to gain a better foothold.

The Indian, who reached the final in 2009 started the match badly losing his first and third service games in the first set.

However, he tried to make a comeback in the second set but was forced to surrender the initiative of two break points in the second game during which Goffin made some big forehand return.

Devvarman still had the advantage after the first deuce and Goffin's strategy was to engage in long rallies.

The Indian Davis Cupper was at the receiving end as Goffin broke the Indian's serve to race away to a 4-3 lead and further increased the lead to 5-3.

Although Devvarman won the ninth game managing to hold his serve, but it was too late in the day. It was long forehand return that ensured victory for the Belgian.
Comments
Somdev DevvarmanDavid GoffinChennai OpenRohan Bopanna