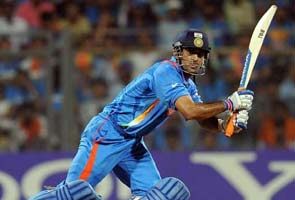 London: It is the bat that sparked frenzied celebrations among millions of people. It is the bat that launched a massive six over long-on and then twirled nonchalantly in its owner's hands. The bat that MS Dhoni used to play that innings in the 2011 World Cup final against Sri Lanka was auctioned at a London hotel for Rs 72 lakhs on Monday.

The aim was to raise funds for Dhoni's wife's charitable organisation - Sakshi Foundation - that works for under-privileged children in India. The bat was bought by RK Global, an investment group from India.

Dhoni's bat ensured massive interest among cricket enthusiasts for the winning runs of the title triumph came via a crunching six off it.

Promoted
Listen to the latest songs, only on JioSaavn.com
Till he made that match-winning 91, Dhoni wasn't in the best of nick in the World Cup, but promoted himself in the title clash and got his runs off just 79 balls.

India defeated Sri Lanka by six wickets in the final in Mumbai, chasing down a target of 275 for the loss of four wickets with 10 balls to spare.