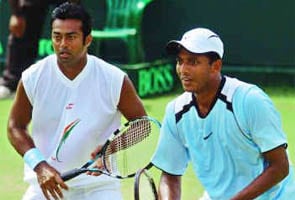 Playing before a capacity crowd, the Indian Express duo started off on a facile note for a swift 6-1 win over Croats Marin Cilic and Ivan Dodig but were tested fully before coming out successfully with a 6-1 6-7 (4) 10-5 score line in a 100 minute marathon, few months before they made it known that they are reuniting to grab the Australian Open title that had eluded them in the past.

In the final today, top seeds Paes and Bhupathi will meet the Dutch-American pair of Robin Haase and David Martin.

Bhupathi said "It was a tough match and difficult to play before a 5,000 capacity crowd, Paes quipped "Chennai is rocking". On the final, Paes said "it is a great start for the 2011 season and we got to play some good tennis to win the final".

The Indian pair played to their set pace that was seen since 1997 before their estrangement but still played to the same pattern with their trade mark approach and made the most of the exciting contest.

After winning five straight points from 4-4 against the Croats, the India duo had six match points but won the match with a creditable four match points, which highlight their preparation for the Australian Open later this month.

Playing as a pair after their last appearance at this tournament in 2002, Paes and Bhupathi raced to a 4-1 lead in the first set with just 15 minutes on the clock, breaking their opponents once in the process. The break achieved on Dodig's serve as his attempt to send a forehand return down the line went wayward. Paes and Bhupathi came up with another break to win the first set.

The manner in which the Indians planned their game plan to effectively find points as one would go lurking close to the net for a smash after the other serves was eye catching and the crowd enjoyed every moment of their cohesion on the court.

The Croats rarely found success when the Indians came up with drop volleys.

In the second set, Cilic and Dodig regrouped and starting putting pressure on the Indians, who broke them in the third game (Cilic) but the hosts were broken back in the very next when Bhupathi served.

From there on, Cilic and Dodig grew in confidence and then the set witnessed the rivals trading breaks and the set drifted to a tie break.

The tie-break saw Cilic and Dodig up their game, with the former in particular sending down blazing forehand returns, which were out of the reach of the Indian duo. After being level on 4-4, the Croatian pair left Paes and Bhupathi in their wake, taking the next three points to take the set 7-4.

However, Paes and Bhupathi brought in their experience in the Super Tie break and the Croats were forced to succumb.

Bhupathi set up the victory path as his fore hand smash was sent out with a low back hander by Cilic (7-4). Then, Paes served and was attacked relentlessly by the rivals alternatively directing their shots to him with Bhupathi watching his partner.

Paes did not give up and one of forehand volley return was sent wayward as they challenged each other for the ball.

On the odd occasion the rivals did venture forward, but the Indians outwitted them and n another occasion, 36-year old Bhupathi retrieved a difficult return for a delectable drop shot.

The top seeds went 9-4 up and had five match points in hand when Cilic send a backhand return a Paes serve ballooning off court. The Croatian fired an ace to reduce the deficit, but a double fault on the next point by Cilic himself gave victory to the Indians.