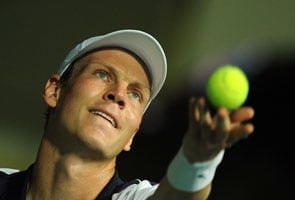 Chennai: Top seed Tomas Berdych of the Czech Republic opened his campaign in the 450,000-dollar ATP Chennai Open with a fluent win over Frederico Gil of Portugal on Tuesday.

The world number six needed just 45 minutes to defeat the 101st-ranked Gil 6-0, 6-1 in a first round match at the Nungambakkam Tennis stadium in the southern Indian city.

Gil was facing a total rout when he trailed 5-0 in the second set, but managed to hold his serve at that stage to win his only game in the match.

"It was important to start well in the new season and I am happy I was able to do that tonight," said 25-year-old Berdych.

"I was aggressive from the start and my game was obviously too fast for him.

"It happens only a few times that one wins a match in 45 minutes. I did not have such a game last year and don't think I will have another one this year.

"But I am not looking too far ahead. I will take it step by step and prepare for my next match" said Berdych, who takes on Ivan Dodig of Croatia in the second round.

Berdych led a march of the seeded players on the second day after two-time defending champion Marin Cilic of Croatia was knocked out by Japan's rising star Kei Nishikori on Monday.

Fourth seed Richard Gasquet of France, ranked 30th in the world, overwhelmed compatriot Edouard Roger-Vasselin 6-1, 6-3 to reach the second round.

"I can't think of a better way to start the year," said Gasquet, who aims to return to the top 10 for the first time since 2007.

The Frenchman next plays Bjorn Phau of Germany for a place in the quarter-finals.

Seventh seed Xavier Malisse of Belgium, who won the Chennai event in 2007, disposed of Marsel Ilhan of Turkey 6-3, 6-1 in another match.

Robin Haase, the eighth-seeded Dutchman, fought off a spirited challenge from Frank Dancevic of Canada before winning 6-7 (6/8), 6-4, 6-4.