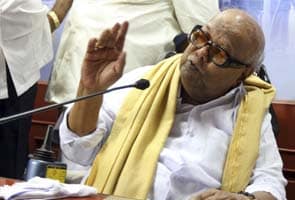 Chennai: DMK president M Karunanidhi has warned of action against his party leaders if they are found to have signed a letter addressed to the United States President Barack Obama urging him to continue the visa ban on Narendra Modi.

Mr Karunanidhi said in a statement that his party never interfered in Centre's foreign policy or its internal affairs "and in the same way we don't accept DMK interfering in the visa issue."

"While MPs have denied they have signed the letter, the party does not accept them signing it. Sending a signed note is not acceptable to the party. If any of our MPs had signed the letter without discussing the matter with the high command, party will take action against them," he said.

After the controversy erupted, a few of the 65 Members of Parliament, who had reportedly signed the letter, have backtracked. The MPs say they never signed any such letter with some even alleging that their signatures have been forged.

The Nationalist Congress Party or NCP's chief whip and Lok Sabha MP Sanjeev Naik told NDTV, "It's hundred per cent forgery. I'm shocked that something like this can happen.  Besides, I'm a Lok Sabha MP and my name is in the Rajya Sabha list."

Echoing his sentiments was the DMK's Dr Ramalingam. "This amounts to forgery. I haven't signed any such letter."

Sitaram Yechury was the first to contest the veracity of his signature. The Left leader says he actually signed a completely different letter in support of the Muslim youths falsely implicated in terror cases. A letter, he says, that was addressed to the President of India, not the American President.

But the man behind the letter, independent MP Mohammad Adeeb, stands by his statement. "Anyone found guilty of cheating colleagues should be punished and removed from Parliament," he said.

Other signatories like Ali Anwar, Shantaram Naik and Asaduddin Owaisi, however, acknowledge that they have signed such a letter.

Meanwhile, the BJP's Sudarshan Bhagat has already sent a complaint to the Speaker. Other parties are expected to follow suit.

Party spokesperson Nirmala Sitharaman said the letter seeks "a third umpire in the USA" for a political match at home which is being lost by Mr Modi's opponents.

Promoted
Listen to the latest songs, only on JioSaavn.com
As the row rages on, the letter seems to have morphed into a letter bomb that's likely to explode in the upcoming Monsoon Session of Parliament, beginning August 5.