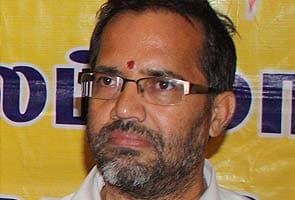 The 52-year-old Ramesh alias Auditor Ramesh was attacked with sharp-edged weapons and he died on the spot, they said.

The identity of the assailants and the motive for the attack were under investigation, police added.

Mr Ramesh is the second senior party functionary in Tamil Nadu to be murdered in the last nine months.

Promoted
Listen to the latest songs, only on JioSaavn.com
BJP state medical wing secretary Dr V Aravind was killed in front of his clinic in Vellore by a gang in October, 2012.

Mr Ramesh was also the state secretary of the RSS in the early nineties. He had unsuccessfully contested the mayor elections in Salem a couple of years ago.
Comments
Tamil NaduBharatiya Janata Party