Rajinikanth fans came out on Chennai streets to support his entry in politics. 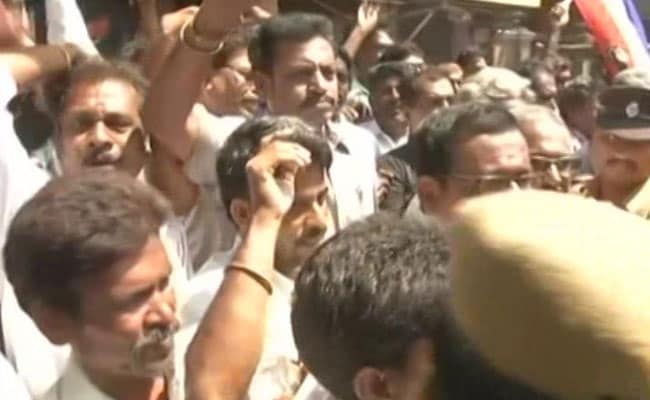 Fans of superstar Rajinikanth came out on Chennai streets in his support.

NEW DELHI: Around three dozen people, fans of superstar Rajinikanth, staged a protest on the streets of Tamil Nadu capital Chennai on Tuesday morning against a fringe group that opposed the actor's possible political debut because he belonged to Karnataka, and not Tamil Nadu.

The group, Tamizhar Munnetra Padai, had yesterday burnt his effigy in the city and threatened to picket the actor's Poes Garden house as well. The protest came against the backdrop of the superstar dropping hints over the past week that he could take the plunge into politics, a move that has been a matter of intense speculation for years.

Rajinikanth has a standing invitation from the BJP to join politics, and the party. He hasn't commented on the offer; he hasn't said no either. On Monday, he declared that he had no political aspirations but "if God wills it, I will enter politics tomorrow".

But the fringe group TMP has insisted that he should not aspire to politically lead the state when there were good Tamil leaders.

The superstar has said there were good leaders in the state but endemic corruption was a problem in the state. He also added that he was "a pure Tamil" and that he has been in Tamil Nadu for more than forty years and spent just 23 years in the neighbouring state.

However, Rajini's office has dissociated itself from these protests. Fans are divided over their icon's political aspirations.

Krthika Subramanian, a graduate student  says "He is a great actor but lacks experience. At this age, he can't connect with youngsters politically. Best he stays an actor gracefully".  But there are many others such as T Raju who believe "Rajini Sir's" charishma cuts across all age grous. "I'm sure he would do lots of good things. He has already said he would not allow corrupt people near him".