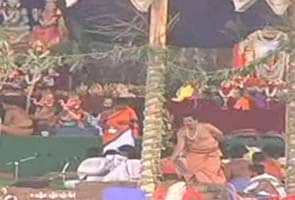 Priests performing the puja at Reddys' bungalow in Bellary.

"The family is hoping and praying he will be out of jail soon," Sriramulu, a close associate of Janardhana Reddy said.

The mining baron and his brother-in-law Srinivasa Reddy were arrested by the Central Bureau of Investigation or CBI in September 2011 on allegations of illegal mining of iron ore in Anantapur district of Andhra Pradesh.

Promoted
Listen to the latest songs, only on JioSaavn.com
Janardhana Reddy is also an accused in cash-for-bail scam. He allegedly bribed a judge of the CBI court to get bail in the illegal mining case.

The Anti-Corruption Bureau (ACB) of Andhra Pradesh had last year arrested the judge, his son and several others in the case.