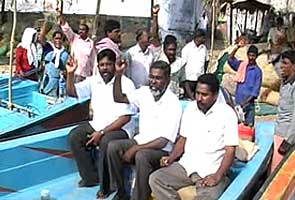 Kudankulam: Around 3,000 villagers living near the Kudankulam nuclear power plant in Tamil Nadu are protesting in sea today. They allege that loud noise and smoke from the plant over the last few weeks is affecting them, especially pregnant women and old people.

Police have deployed some 3,000 personnel at the protest site behind Anu Vijay town, where scientists and other employees at the plant live. Yesterday, police fired tear gas at protesters, who allegedly threw stones at them when they entered a village.

SP Udayakumar of the People's Movement Against Nuclear Energy, which is leading the protest, said: "We are attempting to lay siege to the township as we are very concerned about the noise, smoke and odour from the plant."

Promoted
Listen to the latest songs, only on JioSaavn.com
Kudankulam authorities say the noise emanates from testing of steam valves at the plant but there was no threat to the villagers.

The Kudankulam plant, an Indo-Russian project, is likely to be commissioned by the month-end after missing several deadlines. Protests against the plant intensified in 2011 after a disaster at the Fukushima nuclear plant in Japan.