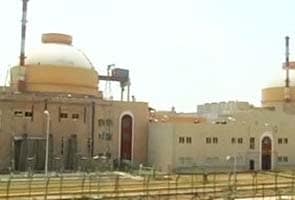 According to the company's report on the power supply position in the southern region for Saturday, the KNPP's first unit, now on a test run, generated 165 MW yesterday.

On October 22, the 1,000 MW capacity KNPP unit was synchronised with the power grid at 2.45 am, generating 75 MW of power. The power generation was subsequently increased to 160 MW.

Nearly two hours later the unit tripped though KNPP officials maintain that the plant had been stopped.

On Friday 9.43 pm, the unit was reconnected to the grid and was generating around 160 MW.

However, the reports of Power System Operation Corporation Saturday relating to the southern regional load dispatch centre were silent on the power generation levels at KNPP. Citing the reports, the anti-KNPP activists yesterday disputed the KNPP's claims of getting connected to the grid and generating power.

Officials of KNPP were not available to clarify the position.

A senior official at Power System Operation Corporation told IANS that the first unit of the plant is connected to the grid and supply power.

According to power sector officials, the power generated by KNPP now is termed as infirm power and will be supplied to the home state Tamil Nadu.

Only when the unit is declared as commercially operational then the power generated will be shared with other southern states, officials added.

India's atomic power plant operator Nuclear Power Corporation of India Ltd (NPCIL) has been setting up two 1,000 MW Russian reactors at Kudankulam in Tirunelveli district, around 650 km from Chennai. The total outlay for the project is over Rs 17,000 crore.

The first unit attained criticality, which is the beginning of the fission process, for the first time in July 2013.

In August, the Atomic Energy Regulatory Board (AERB) gave its nod to KNPP to raise the reactor power levels to 50 percent and for synchronisation of the unit with the power grid.

The NPCIL earlier said it would connect the first unit to the grid end-August, generating 400 MW power.
Comments
KudankulamKNPP