Karnataka Assembly Election 2018: To give a boost to the BJP election campaign, PM Narendra Modi kicked off a five-day campaign tour today. 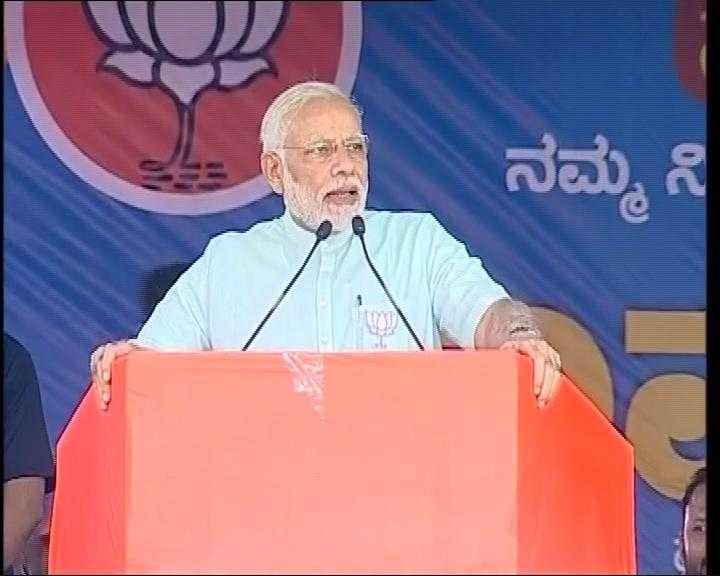 New Delhi: The countdown to Karnataka assembly election 2018 - expected to see a close battle between the BJP and Congress - has begun and senior leaders from both the parties are headed to the poll-bound state for the final showdown before the polling day on May 12. To give a boost to the BJP election campaign, Prime Minister Narendra Modi has kicked off a five-day election campaign tour today. He is scheduled to address 15 rallies in different parts of the state.

On day 1, PM Modi addressed his first public meeting in Santhemarahalli in Chamarajanagar. He is scheduled to address two more rallies in Udupi and Belagavi. The BJP -- in a bid to form a government again in Karnataka -- has scheduled over 60 rallies ahead of the election day, which will be addressed by several senior leaders including BJP National President Amit Shah, Uttar Pradesh Chief Minister Yogi Adityanath, Defence Minister Nirmala Sitharaman, among others.

Here are the updates of PM Narendra Modi election rally in Karnataka: 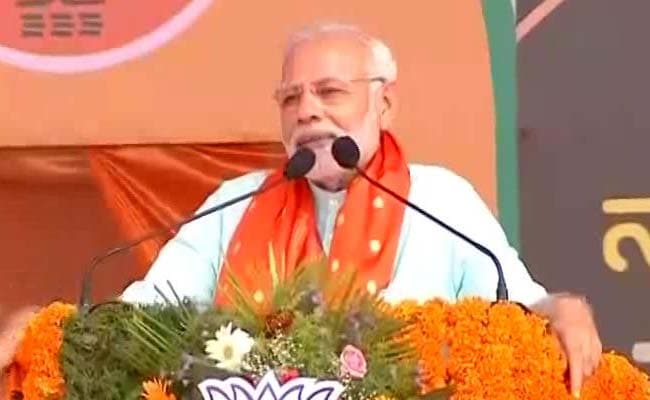 "Our government will leave no stone unturned to fulfill aspirations of people of Karnataka and ensure all round development of the state," PM Modi said at a rally in Karnataka's Udupi.
May 01, 2018 15:00 (IST)
"It is the NDA Government that is working to transform the lives of farmers. The farmers of Karnataka are benefitting from the various initiatives of the Central Government," PM Modi said.
May 01, 2018 14:55 (IST)
"I don't know about me but you have a 2+1 formula PM Sir," Siddaramaiah tweeted in response to Prime Minister Narendra Modi saying "The (Karnataka CM) has a 2+1 formula".
May 01, 2018 13:35 (IST)
Under the leadership of PM Modi and BS Yedyurappa we will bring Karnataka back on the path of development: Amit Shah in Sringeri
May 01, 2018 13:18 (IST)
At the Sringeri public meeting, Amit Shah slammed the Congress government in Karnataka and said, "Siddaramaiah government is the most corrupt and anti-farmer government."
May 01, 2018 13:17 (IST)
After PM Modi's first public meeting for the day, BJP National President Amit Shah is now addressing a rally in Sringeri.

May 01, 2018 13:04 (IST)
The BJP on its official handle tweeted pictures of the "massive crowd" at the first public meeting on day 1 of PM Modi's five-day election campaign.

May 01, 2018 12:52 (IST)
PM Modi Talks Of "2+1 Formula" In Karnataka
"There is 2+1 formula which being practiced in Karnataka, it is a version of the Congress's family politics in Karnataka. Kabhi kabhi jaagnewale aur zadatar soonewale yahan ke CM ka yeh political innovation hai (This is the initiative of the chief minister, who is mostly sleeping)," PM Modi said in Karnataka. "If CM has a 2+1 formula then ministers have 1+1 formula. Relatives of the ministers are fighting polls. This is hurting the workers of the Congress," he added as he attacked the Congress government in Karnataka and accused it of nepotism.
May 01, 2018 12:45 (IST)
PM Modi - referring to the centre's achievements - said the farmers in Karnataka were getting a fair price for their crops due to centre's initiatives. "It is the NDA government that is working to transform the lives of farmers. The farmers of Karnataka are benefiting from the various initiatives of the central government," he said.
May 01, 2018 12:44 (IST)
Attacking the Siddaramaiah government, PM Modi said the state was not progressing due to unemployment and the state was not able to tap the tourism potential under the current government. "Why are the people of Chamarajanagar not getting access to proper drinking water, jobs and why is the tourism potential here not being harnessed. What is the state government doing?" he asked
May 01, 2018 12:42 (IST)
In Karnataka there is no law, there is no order. The Lokayukta is not safe, how can the common people be safe: PM Modi in Karnataka
May 01, 2018 12:38 (IST)
On May 12,  you will have to vote for the future of Karnataka. You have to vote for the BJP to choose honesty over corruption: PM Modi
May 01, 2018 12:33 (IST)
PM Modi spoke about the Rahul Gandhi challenge of a 15-minute face off in parliament and said the Congress President should rather try facing the public in Karnataka for 15 minutes. "I challenge you (Rahul Gandhi) to speak for 15 minutes on the achievements of your government in Karnataka without reading from any piece of paper. You can speak in Hindi, English or your mother tongue," he said
May 01, 2018 12:31 (IST)
PM Modi began his speech in Kannada but now as he speaks in Hindi, an interpreter accompanies him to translate his speech.
May 01, 2018 12:30 (IST)
Perhaps due to over excitement, the newly elected Congress President forgets decency. He did not even bother to congratulate the hardworking 'Mazdoors' due to whom India's villages are getting electricity: PM Modi
May 01, 2018 12:27 (IST)
"In 2005, during the tenure of Sonia Gandhi's government, Dr. Manmohan Singh had said he will provide electricity to every village by 2009. What happened to that? In any case, we saw how the Congress treated Dr. Manmohan Singh. They tore off ordinances and disrespected him," PM Modi said at the rally.
"Manmohan Singh had launched Rajiv Gandhi electrification scheme to electrify all villages by 2009. Instead of questioning our achievement, will he, Sonia Gandhi and Rahul Gandhi answer why this promise was not fulfilled?" he further said.
May 01, 2018 12:25 (IST)
Those who keep abusing us day and night do not tell why there are still 4 crore households without electricity. We have vowed to electrify these 4 crore households through 'Saubhagya Yojana': PM Modi
May 01, 2018 12:24 (IST)
I want to dedicate the historical achievement of the country on 28 April, when all villages in India were electrified, to the workers and labourers of the country on this Labour day: PM Modi
May 01, 2018 12:23 (IST)
Before I came here, I was told there is a 'wave' for the BJP In Karnataka. Now that I am here, I can tell you - it is much more than that. There is not a BJP wave in Karnataka but it is a BJP storm: PM Modi in Karnataka
May 01, 2018 12:22 (IST)
Referring to the the Labour Day, PM Modi said, "The Congress President is 'Namdaar' so how does he know about the efforts of 'Kaamdaars'."
May 01, 2018 12:21 (IST)
"We had promised that every single village in India will get electricity. I am happy to inform you that the BJP government has delivered its promise. Electricity has reached every village, and will very soon be in every home. 18,000 villages which were living in the 18th century, can finally experience electricity," PM Modi at the Santhemarahalli rally.
May 01, 2018 12:20 (IST)
Lashing out at the critics, PM Modi talked about rural electrification on day 1 of his five-day election campaign. "We have done what was not done in the last 70 years since independence. We aim to electrify the 4 crore households of the 25 crore households which are still not electrified."
May 01, 2018 12:16 (IST)
BS Yeddyurappa is the hope of the people of Karnataka and he is going to be the future chief minister of the state: PM Modi in Karnataka
May 01, 2018 12:13 (IST)
PM Modi, who is from Gujarat, reminded the crowd that it's Gujarat Day.
May 01, 2018 12:13 (IST)
Today is the day of labourers, people who work so hard to give us comfort: PM Modi
May 01, 2018 12:07 (IST)
As PM Modi began rally in Santhemarahalli, he addressed the crowd in Kannada.
May 01, 2018 11:40 (IST)

Looking forward to being in Karnataka today. I will be addressing three rallies across the state. @BJP4Karnatakahttps://t.co/6X8rE9jkkL