Kanimozhi gets permission to participate in the DMK agitation 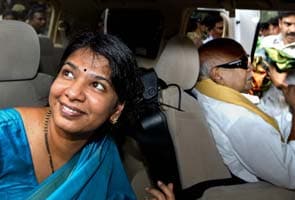 Chennai: DMK leader Kanimozhi, a high profile accused person in the 2G case, has been granted permission by the CBI Special Judge O.P Saini to leave Delhi and participate in DMK's 'fill the jails' agitation tomorrow.

Kanimozhi is out on bail and had earlier obtained the Court's permission to attend Rajya Sabha sessions. DMK Chief Karunanidhi's daughter is back in the limelight after her bail; addressing public meetings, visiting party leaders in prisons across Tamil Nadu and also posing for photographs during talks between UPA leaders and her father at her C.I.T Colony residence.

Promoted
Listen to the latest songs, only on JioSaavn.com
With Karunanidhi not likely to participate in the demonstration due to his advanced age and health, all eyes will be on his children- treasurer M.K Stalin, Union Chemicals and Fertilizers Minister M.K. Alagiri and Rajya Sabha Member Of Parliament Kanimozhi.