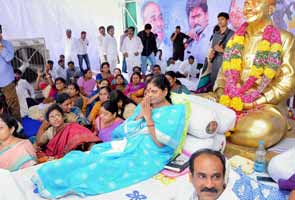 Hyderabad: YSR Congress party honorary president Y.S. Vijayamma, who was forcibly taken to hospital while on hunger strike by police in Guntur in Andhra Pradesh on Saturday morning, continues to fast in hospital, officials said.

Vijayamma, whose fast in protest against the bifurcation of Andhra Pradesh entered the sixth day Saturday, is refusing treatment. Police have tightened security around the government-run hospital where she is admitted, and not allowing anybody inside, except other patients.

The widow of former chief minister Y.S. Rajasekhara Reddy was forcibly shifted to hospital as her condition started deteriorating. YSR Congress workers resisted the police attempts to take her to hospital, leading to tension as police used force.

Vijayamma is demanding that the centre not bifurcate the state, if it cannot render justice to all the regions of Andhra Pradesh.

Vijayamma and 16 other state legislators of the party, and both its MPs, have submitted their resignations to protest the manner in which the United Progressive Alliance at the centre decided to divide the state.

Both YSR Congress and TDP have called for a shutdown in Guntur town against the police action. Shops, business establishments and educational institutions remained closed.

Protests continued in Seemandhra (Rayalaseema and Andhra) for the 25th day against the decision to bifurcate the state.

Promoted
Listen to the latest songs, only on JioSaavn.com
More than six lakh government employees, including two lakh teachers in 13 districts of Seemandhra, were continuing their strike, demanding a reversal of the decision to divide Andhra Pradesh.