Jagan Mohan Reddy's health improves after being admitted to hospital 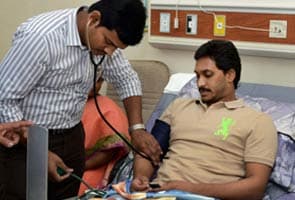 A doctor examines the health of YSR Congress President Jagan Mohan Reddy at a hospital in Hyderabad on Friday.

Hyderabad: The health condition of YSR Congress president YS Jagan Mohan Reddy, who was admitted to a government hospital in Hyderabad following a five-day fast, is improving though he suffers from a respiratory tract infection, doctors said today.

Mr Reddy was shifted to the Nizam's Institute of Medical Sciences (NIMS) by the police on October 9 from his fast camp. He was forcefully given IV fluids with police help that night. He is being given fluids orally and soft diet since last night.

A team of policemen swooped down on Mr Reddy's house in the posh Jubilee Hills area on Wednesday night, lifted him and put him in an ambulance.

The Kadapa MP began his indefinite fast on October 5 in support of "united" Andhra Pradesh and doctors had advised that he should call it off since his blood sugar levels and other parameters were worrisome.

Promoted
Listen to the latest songs, only on JioSaavn.com
Though Mr Reddy wanted to continue his fast even after being admitted to the hospital, he was forcibly administered treatment in view of his condition. He had launched a hunger strike on the same issue while he was in jail here last month, and then too, he was forced to break it after he was hospitalised.