In Kerala, a festival that marks the world's largest gathering of women 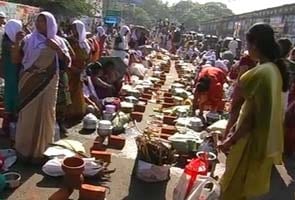 Last year, the celebrations earned a Guinness Book World Record as the largest gathering of women.

Today marks the culmination of 10 days of prayers and rituals offered to the temple.

Earlier today, the final stretch of rituals was inaugurated after the head priest lit a lamp at the Attukal Bhagwati temple, which can only be visited by women.

After that, the streets were filled with women who cooked their "Pongala" or mixture of rice, jaggery and coconut   on makeshift stoves of bricks and wood -the meal is intended as an offering to the goddess.

72 hours earlier, women began lining up at Attukal temple premises, for the coveted chance to cook their offering within the temple's premises.

Nearly 5000 police personnel have been deployed to ensure the security of the devotees.