As per local legend the pongala festival commemorates the hospitality accorded by women in the locality to Kannagi, the divine incarnation of the heroine of the Tamil epic 'Silappadhikaram' while she was on her way to Kodungalur in central Kerala after destroying Madurai city to avenge the injustice to her husband Kovilan. 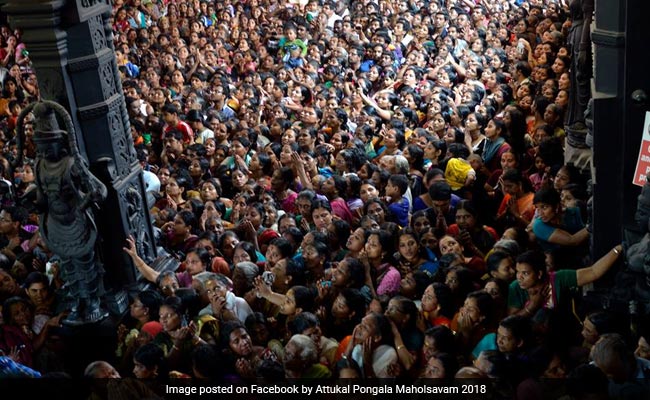 In 2009, the ritual had made it to the Guinness Book of World Records (File)

Thiruvananthapuram: Braving the hot sun, thousands of women prepared 'Pongala' (offering) in makeshift brick stoves to appease the presiding deity of Attukal Bhagavathy temple here, in what is called as one of the world's largest all women gatherings.

The women, who converged here from all over the state and outside, prepared 'pongala' (a mix of rice, jaggery and scraped coconut) for about two hours in fresh earthen or metal pots by lining up on either side of the roads around the shrine.

And thanks to makeshift brick stoves lined up on the either side of the road, the city seemed to be converted into a 'yaga shala'.

The worshippers started converging here a day ahead of the festival, which also saw participation of eminent personalities, including the wife of the Kerala Governor, well known poetess Suguthakumari and veteran sprint queen P T Usha.

In 2009, the ritual had made it to the Guinness Book of World Records for being the largest religious gathering of women on a single day when over 2.5 million people took part in it.

The rituals began at 10.15 am when chief priest Vamanan Namboothiri lit the main hearth (Pandara Adappu) near the shrine -- signalling the start of the annual ritual, while the sanctification (Nivedyam) ceremony was held at 2.20 pm.

At least 983 boys, aged below 13 years, will participate in 'Kuthiyottam' later tonight when the presiding deity's idol will be taken in a procession to Sastha temple at Mannacaud.

This when a controversy had already been erupted over the conduct of 'Kuthiyottam' ritual, with the Kerala state Commission for Protection of Child Rights suo motu registering case.

Notably, DGP R Sreelekha had also protested against the ritual in her blog.

"An iron hook, tiny though it is, will be pierced into their skin on their flanks. They scream. Blood comes out. A thread will be symbolically knotted through the hooks to symbolise their bond with divinity", the IPS officer had written in her blog.

"Then the hooks are pulled out and ash roughly applied on the wounds! All this for the temple deity!" she said.

However, the temple authorities have rejected the charges and said no one was being forced by the shrine to participate in the ritual.

All educational institutions and offices in the state capital are closed today on the occasion of the festival.

Attukal temple is also called 'women's Sabarimala' as only women perform the ritual, while it is predominantly men who undertake the pilgrimage to the hill shrine of Lord Ayyappa at Sabarimla.

Women in the age group of 10-50 years are not allowed to worship at Sabarimala under the temple tradition, which has been challenged in the Supreme Court recently.

As per local legend the pongala festival commemorates the hospitality accorded by women in the locality to Kannagi, the divine incarnation of the heroine of the Tamil epic 'Silappadhikaram' while she was on her way to Kodungalur in central Kerala after destroying Madurai city to avenge the injustice to her husband Kovilan.

The pongala festival marks the finale of the 10-day ritual at the shrine.

Also, at least 4,200 police personnel, including from Tamil Nadu and women commandos, were deployed to ensure that the festival went off without any untoward incident.