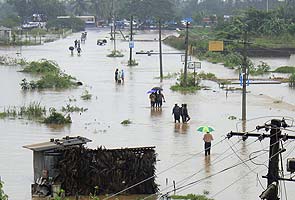 Hyderabad: The rains triggered by Cyclone Nilam which crossed the Andhra Pradesh coast near Chennai on October 31 have battered the state, claiming 29 lives.

Normal life has been thrown out of gear in the region and hundreds of villages remained inundated. In East and West Godavari districts, famous as the rice bowl of the state, standing paddy and cotton crops over lakhs of acres were damaged.

Officials said they were making efforts to provide relief to the marooned villages in the worst-hit districts. Chief Minister Kiran Kumar Reddy has assured all the help to farmers, whose standing crops have been destroyed, weavers and fishermen.

"The flood situation is quite severe as the region has seen five or six times the normal rainfall. Fishermen and weavers have lost livelihood. Nearly three lakh hectare crop is under water. The crop loss is being estimated and we will provide compensation after enumerating the loss," Mr Reddy told NDTV.

The Chief Minister also dismissed reports that the government machinery was caught off-guard as the MeT department had not alerted the state government. The state's revenue minister, Raghuveera Reddy, had said yesterday that weather department issued no warning about the torrential rain that would batter the coast once the cyclone had passed.

Prime Minister Manmohan Singh on Tuesday called Mr Reddy with an offer of help from the Central government for flood-affected areas of the state.

The heavy rains for nearly a week rendered thousands of people homeless. Villages and towns in eight districts were inundated. About 70,000 people were sheltered in relief camps. The floods damaged crops over five lakh hectares, roads and railway tracks.

Several colonies in Vijayawada city in Krishna district remained under water. A similar situation is prevailing in Kakinada town of East Godavari district.

Leader of Opposition in the state assembly and Telugu Desam Party (TDP) chief N. Chandrababu Naidu demanded that the destruction caused by the cyclone be declared a national disaster. He said the government failed to take timely action to prevent losses.