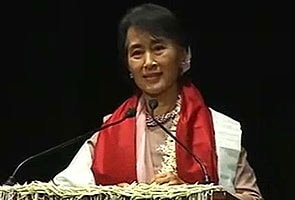 Hyderabad: A Dalit enclave in a village in Andhra Pradesh's Anantapur district was named after Myanmar's pro-democracy leader Aung San Suu Kyi to mark her visit on Saturday.

Honouring the visiting dignitary, the local authorities grandiosely re-named the segregated Scheduled Caste (SC) enclave in Papasanipalli village as Aung San Suu Kyi Colony. A huge banner with the new name of the colony greeted the Noble laureate during her visit to the village.

Thanking the villagers for this gesture, Suu Kyi said this had given her a special link to the village. "My name means broad collection of strange victories and I hope you will have bright and unusual victories," she told the villagers.

"Victory doesn't come by itself. You have to work hard for it," she said.