A specific muscle causes the inner-eyebrow raise that makes dogs' eyes appear bigger and more infant-like and produces a look similar to one humans make when sad. 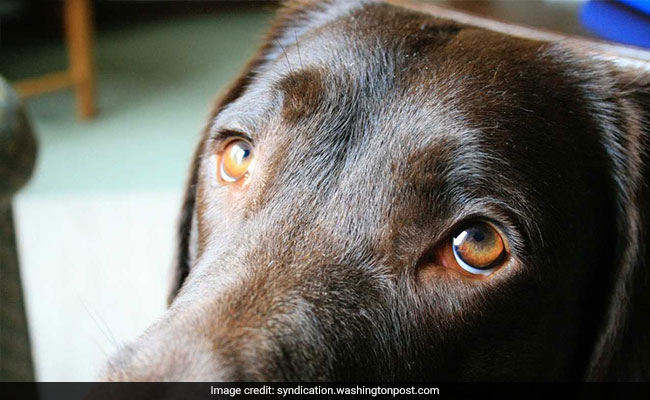 When it comes to human-dog connections, eyes are important.

The mournful, pleading, eyebrows-up expression dogs make is so familiar that we have made it into an idiom: puppy-dog eyes.

A new study suggests it's yet another example of dogs' ability to communicate with people, one that evolved as the animals were domesticated from ancient wolves at least 15,000 years ago.

A specific muscle causes the inner-eyebrow raise that makes dogs' eyes appear bigger and more infant-like and produces a look similar to one humans make when sad. The researchers found that while six deceased dogs they dissected uniformly possessed this muscle, four dissected wolves either did not have it or barely did. They also found that 27 shelter dogs in the United Kingdom did the eyebrow-raise far more often and intensely when interacting with strangers than did nine wolves at two UK wildlife parks.

This suggests ancient canines with expressive eyebrows might have elicited nurturing from humans, the authors write, and that care would have given the animals a selection advantage that allowed them to pass on puppy-dog eyes to their descendants. The study was published in the journal Proceedings of the National Academies of Sciences.

"What is so provocative about this finding is the likelihood that our unconscious biases shaped the evolution of the dog's eye musculature," said Brian Hare, a Duke University evolutionary anthropologist and canine cognition expert, who edited the study but was not involved in the research. "The presence of these anatomical differences between wolves and dogs is a smoking gun for the role of our desire to cooperate and communicate with dogs being a driving force in dog evolution."

The new research built on the authors' previous work examining this muscle movement in dogs. One study found shelter dogs that performed the inner eyebrow raise were adopted more quickly than those that did not, in a sort of modern-day demonstration of puppy-dog eyes' power over humans. Another study found that dogs make puppy-dog eyes more when people are looking.

"It's just that kind of behavior that causes lots of dog owners to think, 'Oh my gosh, they want something. What do they need?'" Burrows, a biological anthropologist at Duquesne University, said in an interview.

Like all the physical variation seen in a species humans essentially engineered, the development of this dog eye muscle happened astonishingly fast, she added: "I'm speculating here, but the process of domestication must produce dog evolutionary changes much more quickly than evolutionary changes that you would see in the wild."

When it comes to human-dog connections, eyes are important. Dogs make eye contact with people when a problem stumps them; wolves do not. Researchers have found that when they're gazing into each others' eyes, both humans and dogs experience a rise in levels of oxytocin - the "love hormone." The same things happens when mothers and babies make eye contact.

The new study also identified another facial difference between wolves and dogs. A muscle that pulls the eyelids toward the ears, which Burrows said happens when dogs are panting and almost appear to be "smiling," was present in all the dogs dissected except one - the Siberian husky, an ancient breed that is more closely related to wolves. Three of four wolves dissected had it, but it was thinner and probably weaker, the study said.

The eyebrow finding raises the possibility that puppy-dog eyes aren't something humans chose, but instead that they were a byproduct of domestication. A long-running study on silver fox domestication has demonstrated that certain physical traits - floppy ears, curly tails, mottled coat colors - come along for the ride when people select the tamest animals for breeding. This is called the domestication syndrome, and it's possible dogs' eyebrow raise is a part of it, Burrows said.

"Domestic dogs were created by humans, and clearly we selected species that weren't going to bite us or bite our kids," Burrows said. "So this whole domestication syndrome has features that all link together."

Clive Wynne, a behavioral scientist who directs the Canine Science Collaboratory at Arizona State University, called the study "very interesting, original and thought-provoking." But to be more convinced, he said, he would want to see results from a larger sample that included more dog breeds and wolf subspecies, as well as wolves and dogs with varying levels of experience with humans.

"Although evolution (domestication) has obviously led to crucial changes between dogs and their wolfy ancestors, how an individual behaves in any moment is also due to its individual life experiences," Wynne wrote in an email. "A study that describes behavior between dogs or wolves and people has to explain the kinds of life experiences the individuals being tested have undergone."

Burrows said she and her co-authors plan to continue the research, including by looking at other dog breeds, coyotes and domesticated foxes. The shape of a pug's face is nothing like a collie's, she noted.

"That's going to potentially dictate how the face can move," she said. "So as we expand the study and really focus on what the musculature looks like . . . I'm really interested to see what kinds of differences we can drill down into."