Damage done by higher temperatures -- which turn patches of the reef ashen white -- has threatened to put a break on the number of tourists willing to wrestle their way into a wetsuit. 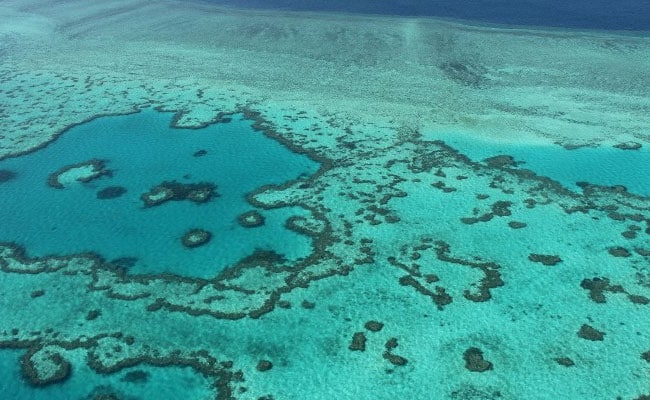 Visitor numbers to the Great Barrier Reef and nearby islands had dropped by 10 percent in 2017. (AFP)

A row is raging over Australia's warming-damaged Great Barrier Reef, with firms worried that scientists' apocalyptic warnings are scaring visitors out of the water.

But damage done by higher temperatures -- which turn patches of the reef ashen white -- has threatened to put a break on the number of tourists willing to wrestle their way into a wetsuit.

There was surprise then, when the Reef and Rainforest Research Centre recently published a markedly more optimistic report, heralding "significant signs of recovery" at major dive sites around Cairns and prompting a flurry of upbeat news coverage.

If the report's findings seemed out of kilter with other studies about the reef, that was by design.

It was part of an effort to show that not all of the Great Barrier Reef is an aquatic wasteland, according to Col McKenzie of tourism industry lobby group AMPTO, which helped carry out the research.

"Overall, are we seeing a drop in visitation because of the negative press, absolutely we are, there's no doubt about that," McKenzie told AFP.

He suggested visitor numbers to the reef and nearby islands had dropped by 10 percent in 2017 and were on track to plunge by a further 15 percent this year.

Although government data shows that the number of visitors to the broader region has actually increased, those figures are older and don't include coral-viewing activities.

McKenzie said it was vital to get the message out that some areas of the massive ecosystem are still teeming with colour and life.

"What people miss with our reef system is... it's a massive structure," he said.

His comments are the latest salvo in a battle between ecologists and the tourism industry, as they struggle to come to terms with competing interests and new realities on the reef.

Professor Terry Hughes of James Cook University, who leads the surveys of bleached corals, cautioned that while some damaged coral regain their colour within several months, more badly damaged reefs can take a decade to recover.

"It's very early days yet," he told AFP, describing a patchy recovery that makes generalisations difficult.

"Basically we are in year one in the middle of the reef, or year two in the northern reefs, in the decade-long process of recovery."

The government's Australian Institute of Marine Science says coral cover has "continued to decline due to the cumulative impacts of multiple, severe disturbances over the past four years".

The same institute showed that apart from the risk of extreme sea surface temperatures -- with some areas more affected, the reef is also grappling with the impacts of farming run-off, development and severe tropical cyclones.

Even within government there are conflicting interests at play, as well as rolling debates about how best to respond.

Canberra has -- so far successfully -- urged UNESCO to hold off listing the reef as an endangered World Heritage site, fearing it would have an adverse economic impact and lead to tougher restrictions on local industry.

It has allocated some $1.4 billion to protect the site, but at the same time backed a huge coal project nearby by Indian mining giant Adani and moved away from legislating climate targets under the Paris Accord.

A parliamentary inquiry was recently set up to investigate why former prime minister Malcolm Turnbull gave nearly half a billion dollars to a small business-backed reef charity without a competitive tender process.

Australians also appear divided on damage done to the reef.

Only half of the country thinks that climate change is already causing the destruction of reef, according to an annual Ipsos poll on environmental issues.

Whichever way the political winds blow, scientists like Hughes are determined to document changes to one of the world's most biodiverse regions.

But that remains a moving target. "It's a critical recovery period," Hughes said.

"The unknown, of course, is whether we'll get another bleaching event, which potentially could come as soon as early next year if we get a heatwave."

(Except for the headline, this story has not been edited by NDTV staff and is published from a syndicated feed.)
Comments
Great Barrier ReefAustraliaTourism