North Pole Is Mysteriously Moving, And US Government Finally Caught Up

Scientists just updated the World Magnetic Model, which cellphone GPS systems and military navigators use to orient themselves. 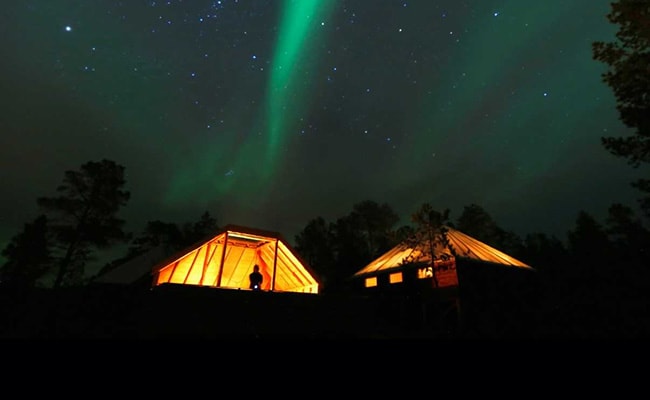 The Aurora Borealis (Northern Lights) is seen over a mountain camp north of the Arctic Circle.

Magnetic north is not where it used to be.

Since 2015, the place to which a compass points has been sprinting toward Siberia at a pace of more than 30 miles a year. This week, after a delay caused by the monthlong partial government shutdown in the United States, humans have finally caught up.

Scientists on Monday released an emergency update to the World Magnetic Model, which cellphone GPS systems and military navigators use to orient themselves. It's a minor change for most of us - noticeable only to people who are attempting to navigate very precisely very close to the Arctic.

But the north magnetic pole's inexorable drift suggests that something strange - and potentially powerful - is taking place deep within Earth. Only by tracking it, said University of Leeds geophysicist Phil Livermore, can scientists hope to understand what's going on.

The planet's magnetic field is generated nearly 2,000 miles beneath our feet, in the swirling, spinning ball of molten metal that forms Earth's core. Changes in that underground flow can alter the Earth's magnetic field lines - and the poles where they converge. Consequently, magnetic north doesn't align with geographic north (the end point of Earth's rotational axis), and it's constantly on the move. Records of ancient magnetic fields from extremely old rocks show that the poles can even flip - an event that has occurred an average of three times every million years.

The first expedition to find magnetic north, in 1831, pinpointed it in the Canadian Arctic. By the time the U.S. Army went looking for the pole in the late 1940s, it had shifted 250 miles to the northwest. Since 1990, it has moved a whopping 600 miles, and it can be found in the middle of the Arctic Ocean, 4 degrees south of geographic north - for the moment.

Curiously, the south magnetic pole hasn't mirrored the peregrinations of its northern counterpart. Since 1990, its location has remained relatively stable, off the coast of eastern Antarctica.

Livermore's research suggests that the North Pole's location is controlled by two patches of magnetic field beneath Canada and Siberia. In 2017, he reported that the Canadian patch seems to be weakening, the result of a liquid iron sloshing through Earth's stormy core. Speaking at a meeting of the American Geophysical Union in December, he suggested that the tumult far below the Arctic may explain the movement of magnetic field lines above it.

Scientists for the National Oceanic and Atmospheric Administration and the British Geological Survey collaborate to produce a new World Magnetic Model - a mathematical representation of the field - every five years. The next update wasn't scheduled until 2020.

But Earth had other plans. Fluctuations in the Arctic were occurring faster than predicted. By the summer, the discrepancy between the World Magnetic Model and the real-time location of the north magnetic pole had nearly exceeded the threshold needed for accurate navigation, said William Brown, a geomagnetic field modeler for the BGS. He and his U.S. counterparts worked on a new model, which was nearly ready to be released when much of the U.S. federal government ran out of funding.

Though the British agency published some elements of the new model on its site, NOAA was responsible for hosting the model and making it available for public use. This portion of the model didn't become available until Monday, a week after most NOAA employees returned to work.

Some have speculated that Earth is overdue for another magnetic-field reversal - an event that hasn't happened for 780,000 years - and the North Pole's recent restlessness may be a sign of a cataclysm to come.

Livermore was skeptical. "There's no evidence" that the localized changes in the Arctic are a sign of something bigger, he said.

Anyway, magnetic field reversals have typically unfolded over the course of 1,000 years or so - giving plenty of time for even the U.S. federal government to adjust.

(This story has not been edited by NDTV staff and is auto-generated from a syndicated feed.)
Comments
North PoleNorth Pole Moving