New Bat Discovered In Africa - And It's Orange, Black Like Halloween

At a time when the United Nations has warned of a biodiversity crisis, with 1 million species facing extinction, a find such as this is greeted as a light in a dark era, Bat Conservation International said in a statement. 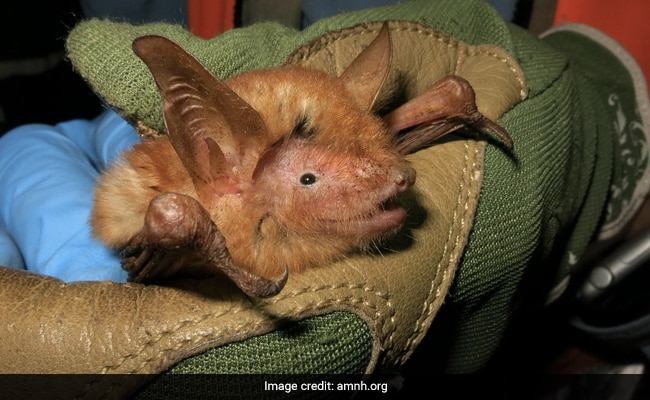 It was a picture of a bat. But not just any bat. This one was orange with striking black wings.

Nancy Simmons was sitting in her office at the American Museum of Natural History two years ago when she got a startling text from a research expedition in Africa.

It was a picture of a bat. But not just any bat. This one was orange with striking black wings, like an ambassador for Halloween. It was also fluffy with big pointy ears.

And one more thing: It was new, never seen, discovered by a research crew sleuthing in caves on a mountain range on the border of the Ivory Coast and New Guinea searching for an entirely different species of bat.

"Wow, this is really cool," said Simmons, a curator at the New York museum. Like Jon Flanders, the director of endangered species intervention at Bat Conservation International who sent the picture from the other side of the world, she didn't quite know what to make of it. Simmons flipped through a bunch of books, looking at pictures of similar bats all over the world.

It took two years to determine that Myotis nimbaensis, named for the Nimba Mountains where it was discovered, was in fact a new species. The confirmation was published Wednesday in the journal American Museum Novitates.

At a time when the United Nations has warned of a biodiversity crisis, with 1 million species facing extinction, a find such as this is greeted as a light in a dark era, Bat Conservation International said in a statement.

"From a biodiversity standpoint, it's mostly gloom and doom so it's always good to have feel-good story," Flanders said.

It's possible that Myotis nimbaensis is only the second bat species found in those mountains, called sky islands because they sit within a wide expanse of lowlands. The study was part of an ongoing effort to help the Nimba Mountain bats survive, Bat Conservation International said.

About 20 new bat species are found each year, experts said, but they don't often look like this new bat. "The color is just phenomenal," Flanders said. "Its wings are black with these orange fingers. There aren't a lot orange bats in the world. I don't tend to work with that many brightly colored bats. It's definitely an unusual one for me."

Flanders and his expedition of eight researchers went to the mountains, where the bats roost in mines that were carved into them. The mines are old and too unstable to enter, so the team tossed nets across the entrance to catch bats as they flew out.

With the Soci&#233;t&#233; des Mines de Fer de Guin&#233;a, a mining company, Bat Conservation is working to build new tunnels that bats can use when the old pathways collapse.

The mission was to find the critically endangered Lamotte's roundleaf bat. But peering into the net at the black roundleaf bats in the black night, Flanders and another member of the expedition, Eric Moïse Bakwo Fils from the University of Maroua, noticed something unusual.

"I looked in a net and there was just something interesting in there," Flanders said. "Eric and I got back to camp and we independently started trying to figure out what the hell was going on. Finding a new species of specially colored bats is very rare. I was like, 'I'm pretty sure this is a new species'. We walked in the room in the morning and simultaneously said 'I think we've got a new species.' "

It was Simmons's job to be sure.

"I ended up going to the Smithsonian and the British Museum of Natural History for an analysis of the tissue sample to look at the DNA," Simmons said. "A lot of bats in Africa haven't been surveyed. To document that this was a new species we had to look very carefully across Africa and compare it to others."

Researchers spent years looking at bats to determine different fur colors, patterns on spiky wings, spots and discoloration on faces. There are other bats as orange as ripe mangoes, in China and South America, but they differ significantly from each other, and certainly from more common black bats.

"It's rare for someone to go out in the field and find a striking, gorgeous animal that's new," Simmons said. "These bats are found only in this area atop the Nimba Mountains. They could have gone extinct and no one would have ever known."