Scientists don't know where they come from, or what celestial event could be so dramatic yet common enough to produce thousands of bursts every day. 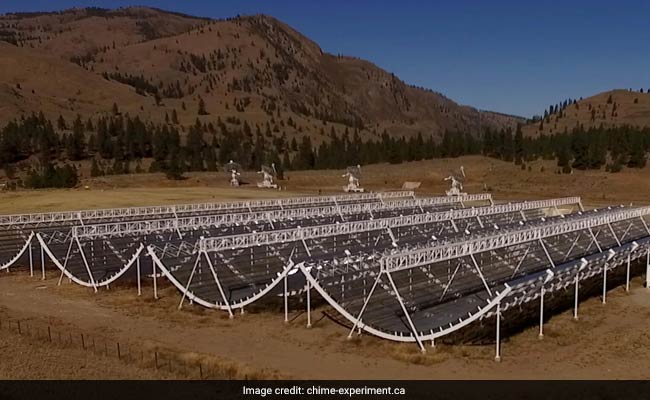 Imagine a flash of radio energy so powerful it outshines the sun. Now imagine a flash like this going off nearly every minute all across the cosmos.

These are fast radio bursts, some of the most enigmatic phenomena in astronomy. Scientists don't know where they come from, or what celestial event could be so dramatic yet common enough to produce thousands of bursts every day.

But they think they're closing in on an answer. At the winter meeting of the American Astronomical Society this week, researchers at a powerful new Canadian telescope announced the detection of 13 new fast radio bursts (FRBs) in a mere two months of observations - a 20 percent increase over the five dozen bursts that have been found in the past 12 years.

One of the newly detected bursts is a rare "repeater" - researchers saw six flashes coming from the same spot in the sky, which they hope will make it easier to pin down the source of the signal. Only one other repeating FRB has ever been found.

This sudden influx of tantalizing clues has made astrophysicists almost giddy.

"These things are coming to us from halfway across the universe and we don't really know anything about them," said McGill University's Shriharsh Tendulkar, a lead author of one of two papers in the journal Nature about the new findings. "Isn't that exciting?"

Work on the Canadian Hydrogen Intensity Mapping Experiment (CHIME), which Tendulkar and his colleagues used for their research, was not quite complete when this initial baker's dozen was detected last July and August. But the cylindrical instrument, which maps a 3-degree-wide swath of the sky every night, was already a dramatic improvement on more traditional telescopes, which can only focus on a single spot.

CHIME has been fully operational since September. Scientists on the project have hinted that at least 100 more bursts will be reported in the weeks to come.

"With fast radio bursts, it's always felt like the more answers we get, the more questions we have," said Sarah Burke-Spolaor, an astrophysicist at West Virginia University who was not involved in the new research. "But I think we're reaching the peak of that mountain."

When the first fast radio burst was detected, in 2007, many scientists thought it had to be a result of some telescopic mix-up. The signals are so brief, they must come from something incredibly small (no bigger than New Jersey) yet they pack as much energy into a millisecond as the sun emits all day. They are also dispersed - high frequency wavelengths arrive earlier than lower-frequency ones - which suggest that they travel long distances across vast expanses of space to reach astronomers' radio dishes.

Scientists have scores of theories about what might create such stupendous signals - spinning cores of collapsed stars, powerful magnetic fields around black holes, the fog of dust and gas from which new stars form. But only one burst has ever been traced back to its source: a repeating burst called FRB 121102, which flickers periodically from a dim dwarf galaxy 3 billion light-years away.

The repeater detected by CHIME bears a strong resemblance to FRB 121102, said Dunlap Institute astrophysicist Cherry Ng, lead author of the second Nature paper. Both have what Ng calls "structure" - distinctive patterns in the timing and frequency of the signals.

"It's really tempting . . . to think that this is maybe a defining feature," Ng said. "But we have to be careful. We still have a sample size of only two."

The CHIME researchers are working with an array of antennas in central New Mexico to pin down the galaxy to which the second repeater belongs. (The fact that it repeats gives them a good chance of spotting it again.) They hope that tracing the radio signal back a known visible object may reveal what produced it.

But that's just one of the riddles associated with this "fantastic phenomenon," said Tendulkar. Scientists are still debating whether repeating FRBs come from the same source as the one-time flashes, or instead represent a distinct type of event. They don't know whether the bursts are like flashbulbs, lighting up the sky in every direction, or focused beams, which would require less energy but must be more frequent for Earth to see so many of them.

It's within the realm of possibility, he said, that there are several types of FRB, each created by a different kind of celestial cataclysm.

The mystery of fast radio bursts has always been a large part of their appeal, Ng said. "I think we are just drawn to anything unknown."

But she is just as thrilled by the revelations that will emerge from solving this mystery. FRBs are among the few types of signal that interact with the diffuse fog of electrons that exists between galaxies. If scientists can figure out how FRBs ought to look when they leave their sources, they may be able to probe the intergalactic medium by studying the way the signals change.

"We are very far from that yet," Ng said. But she says the promise is what keeps her working. "It could be a start to a whole new field in astronomy."