In the Caribbean, researchers are cultivating coral "nurseries" so they can reimplant fresh coral on degraded reefs. 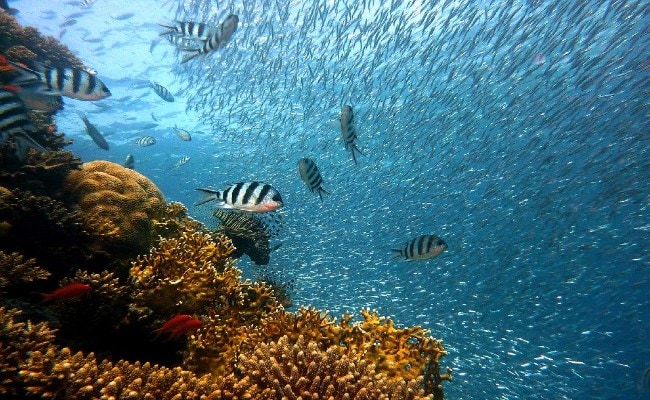 In an experiment, researchers kept underwater loudspeakers in patches of dead coral. (Representational)

The desperate search for ways to help the world's coral reefs rebound from the devastating effects of climate change has given rise to some radical solutions.

In the Caribbean, researchers are cultivating coral "nurseries" so they can reimplant fresh coral on degraded reefs. And in Hawaii, scientists are trying to specially breed corals to be more resilient against rising ocean temperatures.

On Friday, British and Australian researchers rolled out another unorthodox strategy that they say could help restoration efforts: broadcasting the sounds of healthy reefs in dying ones.

In a six-week field experiment, researchers placed underwater loudspeakers in patches of dead coral in Australia's Great Barrier Reef and played audio recordings taken from healthy reefs. The goal was to see whether they could lure back the diverse communities of fish that are essential to counteracting reef degradation.

The results were promising, according to the researchers. The study, published in the journal Nature Communications, found that twice as many fish flocked to the dead coral patches where healthy reef sounds were played compared with the patches where no sound was played.

"Healthy coral reefs are remarkably noisy places - the crackle of snapping shrimp and the whoops and grunts of fish combine to form a dazzling biological soundscape," said Steve Simpson, a marine biology professor at the University of Exeter and a senior author of the study. "Juvenile fish home in on these sounds when they're looking for a place to settle."

According to the study, the number of species present in the reef patches where healthy sounds were played increased by 50 percent over the other patches. The new fish populations included species from all parts of the food web, such as scavengers, herbivores and predatory fish. Importantly, the fish that arrived at the patches tended to stay there.

"Reefs become ghostly quiet when they are degraded, as the shrimps and fish disappear," Simpson said, "but by using loudspeakers to restore this lost soundscape, we can attract young fish back again."

The technique, if it can be replicated on larger scales, could offer scientists another tool to revive coral reefs around the world that have been ravaged by climate change, overfishing and pollution in recent years. Scientists have warned that climate change may already be accelerating too fast for some reefs to recover at all and that conservation efforts are not keeping pace with the devastation.

Severe coral bleaching triggered by extreme heat waves killed off 50 percent of the Great Barrier Reef, the planet's largest coral reef, in 2016 and 2017. Such bleaching events - which occur when the nutrient-rich and color-providing algae that live in corals are expelled because of heat stress - are occurring four times as frequently as they did in the 1980s, as The Washington Post has reported.

The researchers worked from October through December 2017 in a lagoon in the northern part of the Great Barrier Reef that has a large, shallow reef that runs along the coastline.

At the start of fish recruitment season, when fish spawn and mature, the team built 33 experimental reef patches out of dead coral on open sand about 27 yards from the naturally occurring reef. They then fixed underwater loudspeakers to the center of the patches, angling them upward to ensure the sound was distributed in all directions evenly.

Over the course of 40 nights, the team played recordings from a healthy reef in some of the patches. In other patches, they used dummy speakers that emitted no sounds, and they left a third group of patches untouched.

The process, called "acoustic enrichment," had a "significant positive impact on juvenile fish recruitment throughout the study period," the researchers wrote. The acoustically enrich reefs attracted fish faster and maintained them longer than the reefs without a healthy soundtrack, according to the study.

The researchers acknowledged that drawing fish back to dead or dying reefs will not reverse the damage by itself. But degraded reefs have a better shot at recovery if they have robust populations of fish, which play a variety of roles in keeping the coral healthy.

"Fish are crucial for coral reefs to function as healthy ecosystems," said the study's lead author, Tim Gordon, of the University of Exeter. "Boosting fish populations in this way could help to kick-start natural recovery processes, counteracting the damage we're seeing on many coral reefs around the world."