This Is It. Supermassive Black Hole Image Captured For First Time

The black hole image shows the boundary between light and dark around a black hole, called the event horizon - the point of no return, where the gravity of the black hole becomes so extreme that nothing that enters can ever escape. 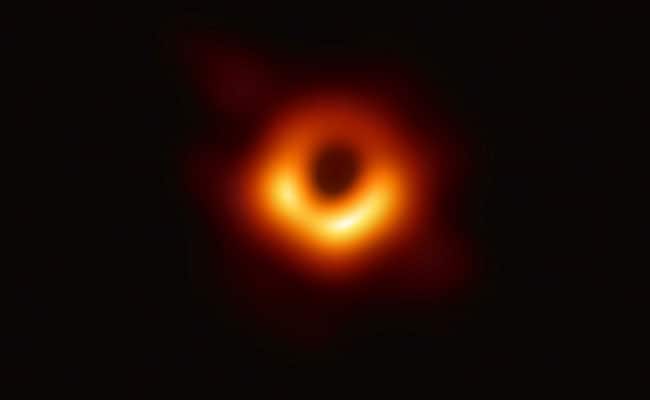 The image of a dark core encircled by a flame-orange halo of white-hot gas and plasma. (AFP)

Scientists have finally captured the first direct image of a supermassive black hole.

The highly anticipated cosmic portrait belongs to the black hole at the center of Messier 87, the largest galaxy we know of, about 54 million light-years away.

The new image comes from the Event Horizon Telescope, a network of 10 radio telescopes spread across the planet and functioning as if it were a single receiver, one tuned to high-frequency radio waves.

The image shows the boundary between light and dark around a black hole, called the event horizon - the point of no return, where the gravity of the black hole becomes so extreme that nothing that enters can ever escape. At the center of the black hole, time and space become so curved upon themselves that the laws of physics break down completely.

In a historic feat by the Event Horizon Telescope and National Science Foundation (@NSFgov), an image of a black hole and its shadow has been captured for the first time. Several of our missions were part of a large effort to observe the same black hole using different wavelengths of light and collect data to understand the black hole's environment. Here's a look at @NASAChandraXRay Observatory's close-up of the core of the M87 galaxy and the black hole at the center of it. Credits: NASA/CXC/Villanova University/J. Neilsen #blackhole #EHTblackhole #galaxy #first

Over the course of a week in April 2017, EHT astronomers on four continents coordinated their efforts to make observations of the supermassive black hole. The two targeted black holes - in the center of the Milky Way and in M87 - are roughly the same apparent size when seen from Earth, because although the M87 black hole is much larger it's also much farther away.

To perform the observation, the astronomers battled bad weather and glitchy electric grids. They donned oxygen tanks and climbed three-mile-high mountains to escape the interference of Earth's atmosphere. Then they spent the two years parsing literal truckloads of data, some of which had to be shipped on hard drives from the South Pole and defrosted outside a supercomputer facility at MIT. Finally, they tested their findings against the results of a million simulations of what a black hole might look like, until at last they spotted a match.

Feryal Ozel, an astrophysicist at the University of Arizona and member of the science council for the EHT, called the result the highlight of her career.

"We are able to image one more object in the universe that . . . at one point people thought could not be possible," she said. "It hits that human explorer spirit. We got another look into the unknown."

The foundations for this discovery were laid more than 100 years ago, when Albert Einstein published the equations that defined modern gravitational physics. General relativity, first described in 1915, explained gravity as a phenomenon created when matter warps the geometry of space and time. In turn, curved space and time ("spacetime") tells matter how to move.

Months after Einstein produced the equations for general relativity, German physicist Karl Schwarzschild calculated that if an object is dense enough, it would create a bottomless pit in spacetime known as a "singularity." Anything within a certain radius of that pit - a region known as the "event horizon" - would be swallowed by its gravity. A black hole (another name for such a singularity) consumes clouds of gas and stars that wander too close; not even light can escape.

Einstein found the notion so preposterous that he devoted an entire research paper to debunking it.

Yet it wasn't long before scientists started seeing proof of black holes' presence everywhere they looked. Models showed that black holes could form when giant stars died. Searches of the sky showed the paths of stars being bent by a black hole's tremendous gravity, and telescopes revealed the brilliant jets of light produced as the superheated material swirling around a black hole is splashed back into space. In 2016, scientists revealed ripples in spacetime caused by black holes colliding - the first ever detection of the phenomenon known as gravitational waves.

All the evidence suggested that Einstein was wrong about black holes - and his theory was right.

But seeing is believing, noted Dan Marrone, an astrophysicist at the University of Arizona who sits on the EHT's science council.

"If we could actually fill in that final hole, show that the universe was working again in a way we arrived at by reason," he said, "that would be pretty cool."

Sag. A* and M87 were the two most promising targets for such a project. The former is close (in cosmic terms) and the latter is humongous, giving scientists a decent shot at capturing them.

Even so, both are so distant they would appear to Earthlings as a doughnut on the moon. To them in any kind of detail, scientists would need a telescope as big as the planet - and of course, no such thing existed.

So in the mid-2000s, scientists began to MacGuyver a telescope out of previously existing infrastructure, linking up instruments around the world to collect scores of observations, each from a slightly different perspective.

This kind of cosmic triangulation, called "very long baseline interferometry," took years to refine. Some telescopes had to be upgraded to capture the right kinds of light. Researchers needed to install atomic clocks precise enough to match up their observations down to the microsecond. Supercomputers had to become orders of magnitude more powerful to process the mountains of data collected.

Most significant was an improvement in VLBI technology that allowed for observations in extremely high frequency radio waves. This is the one form of light that can penetrate the hot gas around a black hole, the vast, dusty expanses of the galaxy, and the atmosphere, carrying an uninterrupted signal from the event horizon all the way to telescopes on Earth.

"We were inventing the methods by which we make images as we went along," Marrone said.

Ozel, who helped coordinate the week of observations from the project's makeshift command center at MIT, recalled the surge of excitement as hundreds of astronomers around the world prepared for their first night of work.

"There was an element of the unknown," she said. Technical difficulties or bad weather at any of the eight sites could jettison a whole night of observations. Even if everything went to plan, the astronomers would be working 16-hours a night gathering data. And it would be months before anyone knew whether their work had paid off.

To Marrone, who coordinated observations in Arizona and at the South Pole from his office at the University of Arizona, "exhausting doesn't begin to describe it." He guessed that he slept for only three hours out of every 24.

After five nights of observing (with one rest day while heavy winds rocked the project's Mexico telescope), the project had collected 5 billion megabytes of data - the equivalent of 960 hard drives containing two billion high quality photographs.

Somewhere in that vast collection was the image of a black hole. Now the scientists had to find it.

Geoffrey Crew, an astronomer at MIT who helped coordinate the data processing, compared the effort to discerning a concerto played at a piano that is missing several keys.

"If you only have a couple of notes you don't know what you're listening to," he said. "It's trying to reconstruct the missing data based on what we know about how music works to create the song."

Four subgroups at four different laboratories around the globe were assigned to develop the image using four different algorithms; none was allowed to know what the others were doing, as a form of quality control.

"If the scientific goal wasn't so attractive and so full of potential, and if we hadn't spent so much time working toward this goal, I think it probably would have fallen apart," Ozel said. "The science kept us together."