Woman Delivers In Ola Cab Enroute To Hospital, Gets Free Rides For 5 Years

In addition to this, there is another reason for the 21-year-old woman to feel elated, as the ride hailing company has announced that Ishwari Singh Vishwakarma and her son can avail free rides for the next five years as a gift. 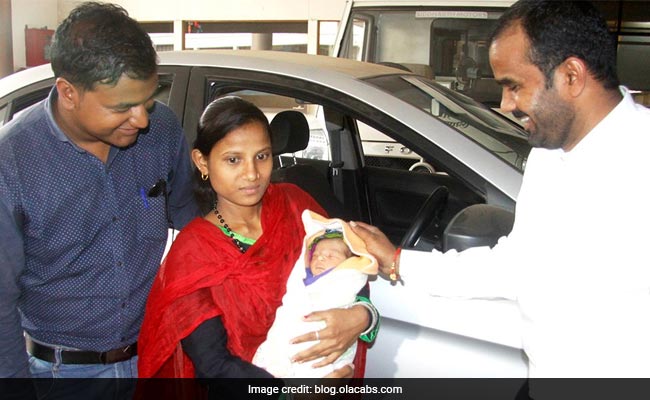 Pune: Ishwari Singh Vishwakarma is on cloud nine as she has become mother of a baby boy. However, what makes the experience unique is that the baby was born in an Ola cab on the way to hospital on the morning of October 2.

In addition to this, there is another reason for the 21-year-old woman to feel elated, as the ride hailing company has announced that Ishwari Singh Vishwakarma and her son can avail free rides for the next five years as a gift.

These rides can be availed by a special coupon, named after the baby.

The incident occurred when the woman went into labour on Monday morning, three weeks before her expected date, her husband Ramesh Singh Vishwakarma said today.

"My wife's expected delivery date was October 24 but in the wee hours of October 2, she started experiencing labour pains, so we booked a cab in the morning to go to Kamla Nehru Hospital, and at around 7.20 am, the cab driver arrived for pick up at our residence in Kondhwa area," Ramesh Singh Vishwakarma said.

Narrating his experience, Mr Vishwakarma said his brother and mother were with his wife in the cab while he was riding a motorcycle on their way to the hospital.

"After travelling four to five kms from home, I got a call from my brother informing me about my wife delivering in the cab," said Mr Vishwakarma, who works in a private firm. Interestingly it was the maiden cab ride for Mr Vishwakarma's wife.

The woman and her son are fine and discharged from the hospital today.

The cabbie Yashwant Galande said he was thrilled by the experience.

Recalling the ride, the driver said the woman's pains gradually increased while they were headed to the hospital, located in Mangalwaaar Peth area of the city, a distance of 12 kms from Kondhwa.

"Looking at her situation, I decided not to stop the cab anywhere and continued to drive to the hospital. However, after travelling for hardly four to five kms, the customer delivered the baby in the backseat with the help of her relative," Mr Yashwant Galande said.

The cabbie said he reached the hospital within 30 minutes after he picked up the woman from her house.

Mr Vishwakarma said he alerted the hospital about the delivery and a team of doctors was waiting at its entrance.

"The doctors immediately detached the umbilical cord inside the cab and got my wife and son admitted for further treatment," he said.

Mr Vishwakarma said he was grateful to the cabbie for taking his wife and the new born to the hospital safely.

In a release, Ola said the mother and the child are entitled to free rides for the next five years as a gift.

"These rides can be availed by a special coupon, named after the baby," it said.

Promoted
Listen to the latest songs, only on JioSaavn.com
Ola also felicitated Mr Galande for going an extra mile to help the passengers in need.

As a goodwill gesture, Ola today sent the same cab and the driver to the hospital to take the mother and baby home.