All five of them died on the spot while the sixth member of the group was unhurt, the police said. 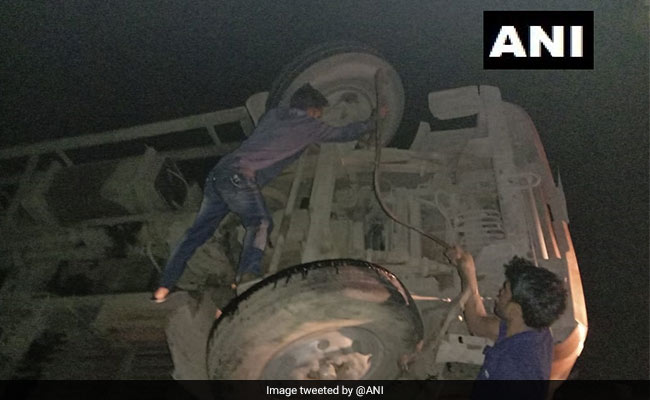 Five people standing on a roadside were killed after a truck overturned on them on the Mumbai-Pune old highway in Maharashtra's Raigad district late Sunday night, the police said.

According to the police, six people who were from a neighbouring Pune district were returning on three motorcycles.

Around 11 pm, all of them stopped on the roadside on the Mumbai-Pune old highway, located around 85 km from Pune.

One of them went nearby while five others were standing on the roadside. At that time, a truck carrying flour in gunny bags was taking a turn towards the same diversion.

"While negotiating the turn, the truck driver lost control over the wheels. As a result, it overturned and all the five persons who were standing on the roadside got trapped under the truck and the gunny bags containing flour," a police said.

All five of them died on the spot while the sixth member of the group was unhurt, the police said.

"After the accident, the truck driver fled, leaving his vehicle on the spot," the official said. A case has been registered against the truck driver and an investigation is underway, the police added.

Close Escape For Pune Woman After Stalker Puts Gun To Her Head, Misfires