Who is Saina Nehwal? 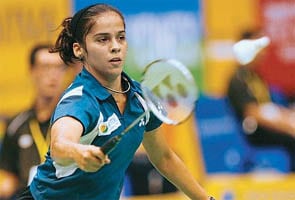 Saina Nehwal battled throughout the London Olympics 2012 and came out with the bronze to help India secure the third medal in the Games. Though her Chinese opponent Xin Wang pulled out to hand the match over, the victory will still be sweet for the world number five who waged superb battles.

One of India's most well-known sports persons, Saina came in with three medals under her belt. She managed to overthrow opponents above her in the rankings before eventually crashing to Yihan Wang - the world number 1. She came back strong in the bronze medal match but eventually lost in the opening set. The medal however will still be a crowing achievement.

Records and laurels have steadily come Saina's way since long. On June 17, she won the Indonesia Open Grand Prix Gold title in Jakarta. This was her third Indonesia Open title.

Earlier in June, she also became the first Indian to win the Thailand Open badminton title. She won the Swiss Open Grand Prix Gold in March 2012.

Saina, however, was introduced to the sport by her parents, both of whom were former champions in Haryana. The right-handed shuttler was born in Dhindar (which is in Haryana's Hisar district) but her father's work took Saina to Hyderabad where she spent her formative years.

She was spotted by PSS Nani Prasad Rao, badminton coach of the Sports Authority of Andhra Pradesh, at the age of 8 and he convinced her father to allow her to pursue a career in badminton. And Mr Harvir Singh backed his daughter's dreams.

Saina first caught India's attention in 2006, when she became the first Indian to win the Philippines Open despite going into the tournament as the 84th seed. Many top-seeded players lay vanquished in her wake as she announced her arrival on the international scene.

In 2008, she became the first Indian woman to make it to the quarterfinal of the Olympics in the singles event. That was the 29th edition of the Games in Beijing.

She also made it to the World Super Series semi-final in December 2008.

She made history in 2009 when she won the Indonesian Open, becoming the first Indian to win a Super Series tournament. She repeated that feat in 2010. She also won a gold medal in the woman's singles event at the New Delhi Commonwealth Games in 2010, which helped India finish No. 2 in the medals tally.

She is being currently coached by Indonesian champion Atik Jauhari while All England Champion Pullela Gopichand is her mentor. She was previously coached by Dronacharya Award winner S M Arif.

Promoted
Listen to the latest songs, only on JioSaavn.com
Honoured with the Arjuna Award in 2009, Saina is part of India's Olympic Gold Quest.

Who is Mohammed Hamid Ansari?