Who is Mohammed Hamid Ansari? 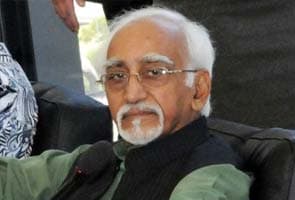 As India's 14 Vice-President, Mohammed Hamid Ansari made history. He became the only person after Dr Sarvepalli Radhakrishnan to get a second term. Mr Ansari, backed by the Congress-led UPA, beat NDA candidate Jaswant Singh comprehensively.

An erudite man and a career bureaucrat, his lack of a political background has been cited as a shortcoming more than once this year when names for potential candidates for Vice President were discussed. Critics had also said that he has been less than perfect in that post in his first stint. Mainly because of his controversial decision not to allow a further extension, for a few hours, of the already extended Winter Session of Parliament as the Rajya Sabha debated the anti-graft Lokpal Bill in December last year. The Opposition cried foul, accusing Mr Ansari of being partisan in his role as Chairman of the Rajya Sabha.

Beyond politics, however, everyone agrees that the 75-year-old Mr Ansari is a thorough gentleman, soft spoken and impeccably mannered. With an array of impressive assignments all around the globe as a diplomat in a career spanning almost 50 years, and awards galore, Mr Ansari also brings a wealth of experience to the table.

Born to Mohammad Abdul Aziz Ansari and Aasiya Begum on April 1, 1937, in Kolkata, Mr Ansari grew up in a family which had the Congress in its blood. He is the grand-nephew of Dr Mukhtar Ahmad Ansari, who was one of the freedom fighters and the Congress President in 1927 (Madras Session). Though his ancestral home is in Ghazipur, Uttar Pradesh, Mr Ansari spent his early life in Kolkata.

After completing a Masters in Political Science, Mr Ansari earned a double doctorate from Shimla's St Edwards School and Kolkata's St Xavier's College. He then pursued a PhD at the Aligarh Muslim University, where he later also served as Vice Chancellor.

Even in his pursuit of three doctoral degrees, Mr Ansari had time for play - he played cricket on his college team. He was was the wicketkeeper. In his later years and now, he is known as an avid golfer and can be seen playing at the Delhi Golf Club on a holiday.

Mr Ansari began his service as a civil servant in the Indian Foreign Service in 1961. Apart from being the Permanent Representative of the country in the United Nations, he served as Ambassador to countries like the UAE, Afghanistan, Iran and Saudi Arabia. He was also the Indian High Commissioner to Australia from 1985 to 1989. He was awarded the Padma Shri in 1984.

Mr Ansari, who also served as the Chairman of the National Commission for Minorities, played a significant role in ensuring compensation to the victims of the 2002 Gujarat riots.

In 2007, his name was proposed by the Left for the post of Vice President, and was backed by the UPA. He won the elections with a thumping majority of 455 votes against his challenger Najma Heptullah, who got only 233 votes. In June this year, he was said to be the UPA's second choice for the presidential polls, but Pranab Mukherjee, the first choice remained that.
Comments
Hamid Ansari