Who is Amit Shah? 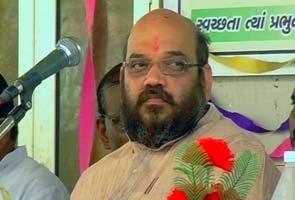 Amit Shah is prominent among those whose careers have been resurrected by the recent "Modi-fication" of the BJP. The Gujarat heavyweight has taken charge of the party's fortunes in Uttar Pradesh and has declared that India's most populous state will lead the NDA's return to power in next year's general elections.

Amit Shah, a close associate of Gujarat Chief Minister Narendra Modi, is known to be a keen strategist and organiser and has the skills needed to pull the BJP out of the morass that it is in in UP - in recent elections it has always come in at number 4 in four-cornered contests. But rivals are not likely to let the BJP forget that Mr Shah carries the taint of a criminal record.

Till the Sohrabuddin fake encounter case came back to haunt him, Mr Shah had only risen, not least because of his mentor, Mr Modi, whose second-in-command he had been for some time. Before the CBI net started closing in on Mr Shah in 2010, he was even considered an option for Chief Minister of Gujarat when Narendra Modi moved to national politics.

Those ambitions were decimated when Mr Shah was charged, arrested and jailed in the Sohrabuddin case. When he was granted bail by the Gujarat High Court, a rider followed that he must leave Gujarat and stay away till the Supreme Court decided on a CBI plea that his bail be cancelled. Last year, the top court confirmed bail for Mr Shah and allowed him to return to Gujarat. He contested the assembly elections in December and surprised no one by posting an easy victory.

In December 2002, when Narendra Modi first crushed the Congress to win a record 126 seats in the 182-member Gujarat Assembly, Amit Shah won by the highest margin of votes, over 1.58 lakh and even higher than Modi himself. His constituency, Sarkhej, elected Amit Shah again in 2007; he bettered the margin of victory winning by 2.35 lakh votes. In 2012, there was no Sarkhej thanks to delimitation, but Mr Shah won from Naranpura, setbacks to his career notwithstanding.

When he returned to Gujarat in September last, people seemed to have moved on. Shah supporters complained that they have been marginalised by the rise of another powerful leader, Revenue Minister Anandiben Patel, also very close to Mr Modi. But Amit Shah proved his resilience when he was appointed BJP general secretary on party president Rajnath Singh's new-look team and was given charge of crucial UP .

Mr Shah, 48, is not popular among colleagues. His promotion this year did not go down well with many in the party who see him as a big liability because of the criminal charges he faces in the Sohrabbudin and Tulsiram Prajapati cases, from the time when he was the powerful minister of state for home in Gujarat. His fellow ministers were quoted as saying that the Minister of State for Home was remote and autocratic, some said arrogant, and had not bothered to keep the best of personal relations with his colleagues.

Thus, many in the Gujarat government had distanced themselves from Mr Shah once the net started closing in upon him.  When the CBI named him in its chargesheet in the murder of small-time gangster Shohrabuddin Sheikh, Mr Shah went virtually underground in the months before his arrest. He stopped using his official mobile phone and his official car. A national daily reported in June 2010 that he had lost over 10 kg from stress since the CBI began investigating the fake encounter case.

Mr Shah was charged with the murder, extortion, kidnapping besides five other sections of IPC in connection with the killing of Sheikh in an allegedly fake encounter and subsequently eliminating his wife Kausar Bi and associate Tulsiram Prajapati.

Mr Shah holds a Bachelor's degree in Bio-Chemistry, was an RSS volunteer and a leader of the BJP's youth wing, the ABVP.

He then rose up the ranks holding various posts in the Gujarat unit of the BJP.

Promoted
Listen to the latest songs, only on JioSaavn.com
Amit Shah has been the president of the Gujarat state chess association, the game his mentor Mr Modi professes a fondness for too. He has also served as vice-president to Mr Modi's president of the state's cricket association.