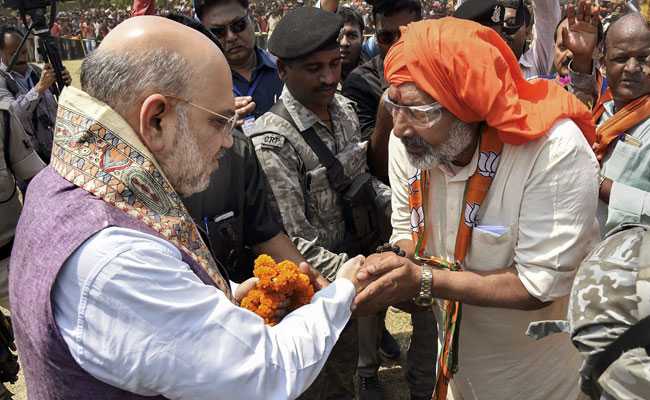 A staunch loyalist of Narendra Modi since the days he was the chief minister of Gujarat, BJP leader Giriraj Singh has seen his political stock rise dramatically in the past one decade.

The 66-year-old Singh, who has won the Begusarai seat in Bihar defeating CPI's Kanhaiya Kumar by a margin of over four lakh votes, belongs to the influential Bhumihar community - earlier supporters of the Congress, but since the Mandal era forming the BJP's backbone in the state.

He had been associated with the Sangh Parivar since his days as a student of Magadh University during which he was an active member of the ABVP. He, however, remained in political wilderness until his election to the state legislative council in 2002 and his induction into the Nitish Kumar cabinet three years later.

Nitish Kumar was perceived to have an overbearing presence by his detractors in the BJP and Mr Singh, by his acts of defiance, endeared himself to hardliners as well as members of his own community, who saw in his blunt support of PM Modi a caste-man asserting himself before an OBC boss.

After it became clear that PM Modi will be the prime ministerial candidate of the BJP and Nitish Kumar parted ways, Mr Singh - who had lost his ministerial berth in the state - was rewarded with a Lok Sabha ticket from Nawada, a seat he won while earning the ignominy of having been banned from campaigning in Bihar and Jharkhand by the Election Commission, which took exception to his pronouncement that those opposed to his leader deserved to be sent to Pakistan.

Six months after PM Modi assumed power in May, 2014, Mr Singh was made the Minister of State for Micro, Small and Medium Enterprises in a cabinet expansion exercise and he continued to hold the post till the government lasted.

While his tenure as a Union minister, like his stint in the state, remained free of blemishes he kept making headlines through acts like prefixing his "gotra" - Shandilya - to his name and urging others to follow the example in the interests of Hindu traditions.

Many of his utterances verged on Hindutva hardline as he repeatedly raised the issue of rising Muslim population in the country and underscored that a decline in the proportion of Hindus in a region invariably led to social strife.

At times he also went against the government line of awaiting the Supreme Court verdict on Ayodhya saying "Hindus were running out of patience". He drew flak when he visited riot-accused Bajrang Dal activists in Nawada last year and lambasted the Nitish Kumar government for the same though his party had come to share power in the state again.

Ahead of a massive rally in the Bihar capital before the elections were announced, Mr Singh once again proclaimed that those who did not attend the same would be deemed to be standing with Pakistan, but ended up missing it himself on account of ill-health, evoking much ridicule.

Electioneering saw him warning Muslims that their reluctance to chant "Vande Mataram" could be detrimental to their own interests as unlike the Hindus who were cremated upon death, they needed "three yards of land for burial". An FIR was lodged in this connection at Begusarai upon the EC's directive and the case of model code of conduct has not been closed, though Singh has secured bail.