The 61-year-old BJP leader, who held the minority affairs portfolio in the outgoing council of ministers, has been appointed Cabinet minister again. 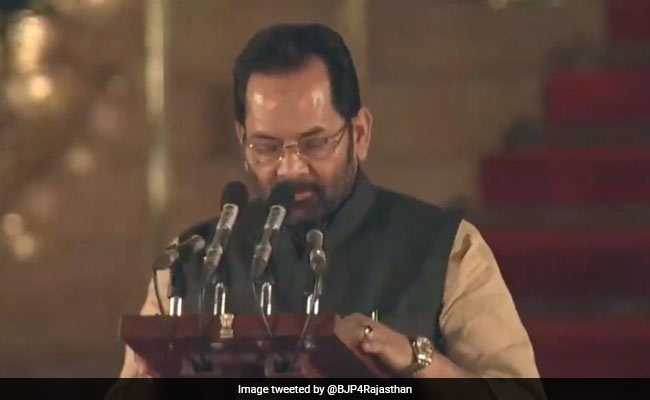 Mukhtar Abbas Naqvi joined the BJP in 1986 while he was in college and decades later, emerged as one of the prominent Muslim faces of his party.

The 61-year-old BJP leader, who held the minority affairs portfolio in the outgoing council of ministers, has been appointed Cabinet minister again.

He was administered the oath of office by President Ram Nath Kovind on Thursday.

As a student, Mr Naqvi actively participated in social, political activities and students movements. He took part in many political campaigns during the Emergency and was even detained at Naini Central Jail at the age of 17.

However, it was not the only time Mr Naqvi was imprisoned. He went to jail over three dozen times for several national movements.

He was the district vice president and general secretary of Yuva Janata (youth wing of the Janata Party), Allahabad, Uttar Pradesh, from 1978 to 1979.

He went on to become an elected member of the state executive of the Yuva Janata, Uttar Pradesh.

Mr Naqvi then became the youth wing's general secretary. He was eventually appointed all India vice president of Bharatiya Janata Yuva Morcha, a post he held from 1992 to 1997.

He swiftly rose through the ranks of the BJP and became the party's national spokesperson.

When he was elected to the Lok Sabha for the first time in 1998, he was appointed minister of state in the Ministry of Information and Broadcasting, with the additional charge of the Ministry of Parliamentary Affairs.