An IPS officer of the 1989 batch, 53-year-old Rajeev Kumar, who holds an engineering degree in computer science from IIT Roorkee, is a native of Uttar Pradesh. 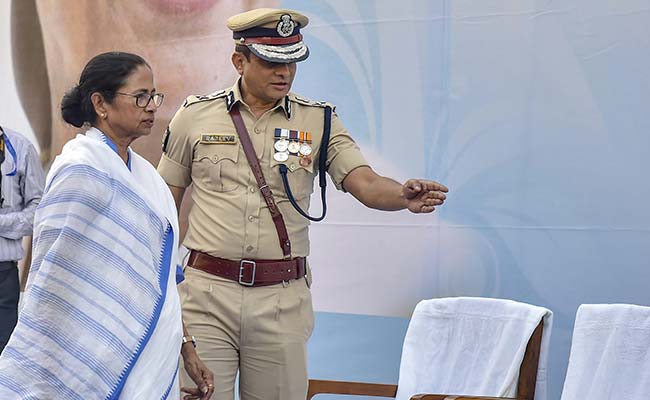 During her days in the opposition, Mamata Banerjee had accused an IPS officer of tapping the phones of political rivals of the ruling Left Front. A decade down the line, she is staging a dharna to protest the CBI's bid to question him.

Ms Banerjee had then accused Mr Kumar of snooping on telephonic conversations of opposition leaders, an allegation rejected by the then Left Front government.

An IPS officer of the 1989 batch, 53-year-old Mr Kumar, who holds an engineering degree in computer science from IIT Roorkee, is a native of Uttar Pradesh.

During his impressive career, Mr Kumar has held important positions including those of Joint Commissioner (Special Task Force) and Director General (CID).

It was under him that the STF of Kolkata Police became a byword for terror for several top Maoists leaders and notorious criminals.

He was instrumental in the arrest of Chattaradhar Mahato, the much-feared convenor of People's Committee Against Police Atrocities, a frontal organisation of CPI (Maoist), at the height of Lalgarh movement. Kumar''s officers disguised as journalist had arrested Mahato.

The tribals of Lalgarh, backed by Maoists, had begun a movement in the region against alleged police atrocities over a decade-and-half ago. They had targeted the then chief minister Buddhadeb Bhattacharjee''s convoy at Salboni in Paschim Medinipur, prompting the government to launch a massive crackdown to flush out the rebels.

"He always stood by his men and officers. He is a team leader in the true sense," a former IPS officer said, adding he enjoys "immense respect" among the rank and file of the Kolkata police force.

In 2011, when Mamata Banerjee''s Trinamool Congress came to power ending the 34-year Left Front rule, she wanted Mr Kumar to be shunted to some insignificant position. She was, however, dissuaded by senior police officers from taking such a course.

Over the next eight years a lot of water has flown down the Howrah bridge.

In January 2012, when Bidhannagar Police Commissionarate was formed, Rajeev Kumar was appointed its first commissioner.

When the Saradha chit fund scam was busted in 2013, thousands of collection agents for the company converged at the TMC headquarters and demanded action against its chairman Sudipta Sen. The first cases against the group were lodged under the jurisdiction of Bidhannagar police commissionerate.

Mr Kumar and his team arrested Mr Sen and his partner in crime Debjani Mukherjee from Jammu and Kashmir on April 18, 2013. The state government formed a special investigation team (SIT) under him to probe the fraud which saw lakhs of depositors getting duped of their hard earned money with the promise of abnormally high returns.

It was during his stint as SIT chief that he grew closer to the ruling dispensation.

His proximity to the establishment also brought with it criticism, as opposition parties accused the SIT of trying to destroy evidences against ruling TMC leaders and stalling the probe.

In November 2013, rebel TMC MP Kunal Ghosh was arrested by the SIT.

A CBI probe into the chit fund scam was ordered by the Supreme Court in May 2014 on a petition by senior Congress leader Abdul Mannan.

Meanwhile, the TMC dispensation elevated him as Additional Director General of CID.

During his tenure as ADG (CID) he outsmarted the CBI and arrested the first accused in the case of rape of a 70-year-old nun. The nun was raped by a gang of seven dacoits inside a Convent in Nadia district on March 14, 2015.

Amid growing outrage, the state government had decided to hand over the case to the CBI on March 18, 2015. But before the federal probe agency could lay its hands on the perpetrators, Mr Kumar arrested the first accused on March 26.

He took over as 21st police commissioner of Kolkata on February 2016, the year the state had its last assembly polls.

In April that year, the Election Commission decided to replace Kumar with Somen Mitra. Once back in power, Mamata Banerjee reinstated Mr Kumar.

Last September, a series of audio clips of purported telephone conversations between Kailash Vijayvargiya, BJP general secretary in charge of West Bengal, and Mukul Roy, a former confidante of Ms Banerjee and now a frontline leader of the BJP, started doing the rounds in social media.

The clips included a conversation where Mr Roy purportedly asked Mr Vijayvargiya to talk to BJP president Amit Shah and get the CBI to keep a "watch" on four IPS officers serving in the state so as to "scare" them.

Mr Roy had then alleged that their phones were tapped by Kolkata police, which rejected the allegations.