Jyotiraditya Scindia won from the Guna constituency in the 2014 national election despite most of his party colleagues facing a defeat amid a widespread Modi wave at that time. 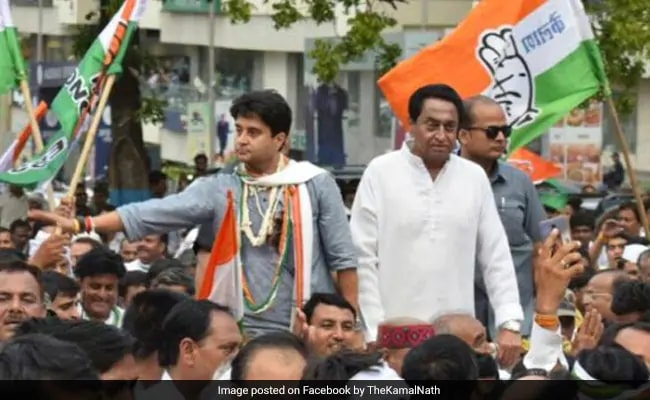 He belongs to the former princely state of Gwalior. (File)

Mr Scindia won from the Guna constituency in the 2014 national election despite most of his party colleagues facing a defeat amid a widespread Modi wave at that time.

He belongs to the former princely state of Gwalior and is a close friend of Congress president Rahul Gandhi.

The 48-year-old has become a key face in the new guard of India's oldest party, bringing in the advantage of youth and popular appeal. Rahul Gandhi, who considers him a trusted adviser, refers to him as "Jyotir".

He entered politics in 2001 and joined the Congress after the death of his father Madhavrao Scindia in a plane crash.

But political affiliations have split the Scindias, with his two aunts Vasundhara Raje and Yashodhara Raje in the BJP. The family matriarch and the mother of Vasundhara Raje, Vijayaraje Scindia, was a founder leader of the ruling BJP. Vasundhara Raje's son Dushyant is also a BJP lawmaker.

Jyotiraditya Scindia was made in charge of the Congress in western Uttar Pradesh in January this year. His skills were put to test in the Hindi heartland state in uniting the party cadres and putting up a good show in the Lok Sabha election.

One of the main contenders for the chief minister's post in Madhya Pradesh after the assembly election in 2018, he settled for a central role along with Congress president Rahul Gandhi.

After he agreed to step aside for 72-year-old Kamal Nath, he had tweeted in December 2018, "It is not a race, it is not about the kursi (post), we are here to serve the people of Madhya Pradesh."

There were also reports of Mr Scidia's rift with the Congress veterans in the state, Digvijaya Singh and Kamal Nath. He, however, had denied these reports.

Jyotiraditya Scindia was the richest candidate contesting in Lok Sabha sixth phase election, with assets worth over Rs. 374 crores.

He is the last scion of the Scindia family of Marathas which ruled the Gwalior state in pre-independent central-India.

February 2018 saw an interesting 'Scindia vs Scindia' face-off during the assembly by-election in Kolaras. Mr Scindia aggressively campaigning for the Congress by referring his late father's contribution to the development of the area. His aunt, Yashodhara Raje of the BJP, campaigned by invoking the legacy of her mother late Rajmata Vijayaraje Scindia.

He studied at Doon School, and then went from Harvard University and Stanford University.

Politics apart, he plays cricket in his free time. He was the chief of the Madhya Pradesh Cricket Association.

He is married to Priyadarshini Raje Scindia, and has a son and a daughter.