Born on October 1, 1964 in Kriparam ji ki Dhani in Lakshmangarh of Sikar district, 55-year-old Dotasara had started his career at the grass-roots level in the party while working as a lawyer. 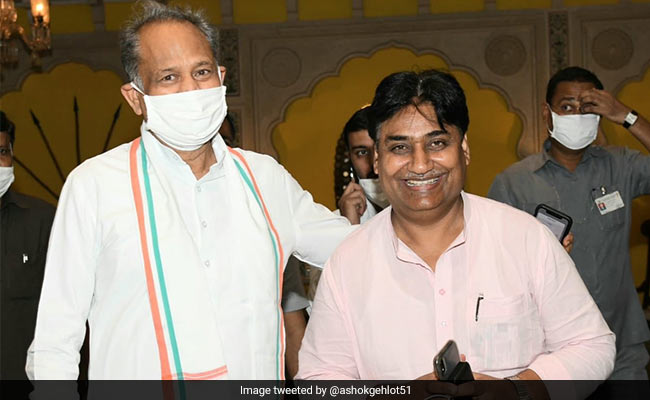 Once a practising lawyer, Rajasthan Education Minister Govind Singh Dotasara's elevation to the post of the state Congress chief came almost 15 years after he contested his first election to become a member of a panchayat samiti in the state.

Born on October 1, 1964 in Kriparam ji ki Dhani in Lakshmangarh of Sikar district, 55-year-old Dotasara had started his career at the grass-roots level in the party while working as a lawyer.

The three-time Congress MLA had contested the Lakshmanagarh panchayat samiti in 2005 before being given the party ticket for the assembly elections three years later.

On Tuesday, he was made the state Congress president after the removal of Sachin Pilot from the post following accusations that he tried to topple the Congress government in the state as part of a "BJP conspiracy".

Earlier, he held the post of the Sikar district Congress president for seven years. He also worked for the Youth Congress.

In 2008, Mr Dotasara for the first time got the party ticket to contest the assembly elections from the Lakshmangarh constituency, from where he won by a slim margin.

Since 2008, he has been continuously winning assembly elections. He was made the state's education minister after the party's victory in the 2018 assembly polls.

Earlier, he held the post of the deputy chief whip of the Congress in the 14th Rajasthan assembly.

Mr Dotasara has completed BCom and then LLB from Rajasthan University. He practised in a Sikar court for almost two decades.

He was married to Sunita Devi on March 4, 1984 and has two sons. His wife is a government schoolteacher.