For Backing Narendra Modi as PM, Rajnath Singh Gets a Plum Posting 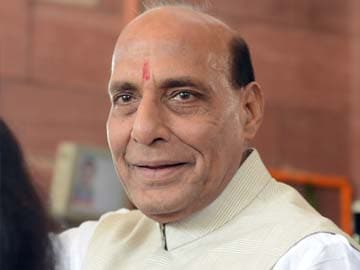 Rajnath Singh, the BJP president, was the second minister to be sworn in after Narendra Modi on Monday. He is the Home Minister.

Mr Singh played a stellar role in Narendra Modi's elevation as the BJP's prime ministerial candidate, over-ruling reservations from party veterans such as L K Advani, Murli Manohar Joshi and Sushma Swaraj. In an interview to NDTV, Mr Singh claimed that he had on his own appointed Amit Shah, a close aide of Mr Modi, as the general secretary incharge of Uttar Pradesh. The move, in hindsight, proved to be a masterstroke, as the party stunned everyone by bagging 71 of the 80 seats in the politically-crucial state.

Mr Singh, 62, first shot into limelight in 1991, when, as the education minister in the Kalyan Singh government in Uttar Pradesh, he ordered a crackdown on school and college students who were caught copying. He became the UP chief minister in 2000-02, and held the post for two years before shifting to the Centre. In the Atal Bihari Vajpayee government, he held the portfolios of surface transport and agriculture, and claims credit for the introduction of "kisan credit cards."

In his first stint as the BJP president, Mr Singh shared a very uneasy relationship with Mr Modi and Leader of the Opposition in the Rajya Sabha Arun Jaitley. He dropped Mr Modi from the party's central parliamentary board, and Mr Jaitley from the post of chief spokesman. He also incurred  Vasundhara Raje's wrath for his insistence that she step down from the leader of the opposition's post in Rajasthan, blaming her for the party's defeat in the 2009 assembly polls. Ms Raje is now the state chief minister.

After taking over as the BJP president for the second time in 2013, Mr Singh mended fences with his three estranged colleagues. The move paid rich dividends. It is now the Modi-Singh-Jaitley troika which is calling the shots in the party.
Comments
Rajnath SinghNarendra ModiUttar PradeshBJPBhartiya Janata Party