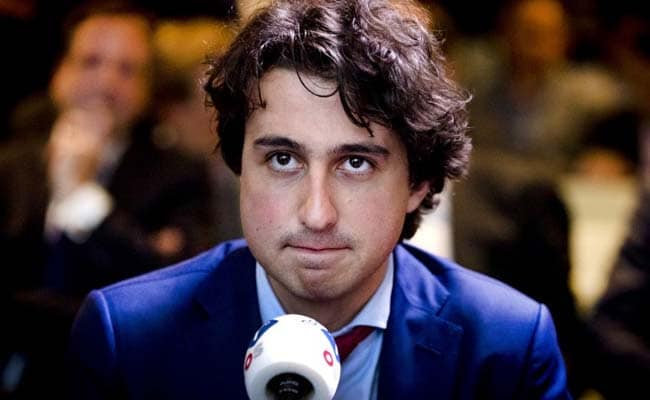 His full name, "Jesse Feras Klaver" echoes the initials of the famous US president. (AFP)

The Hague, Netherlands: Some call him the "Justin Trudeau" of Dutch politics, others see an echo of a young John F Kennedy, while his detractors call him arrogant. But GroenLinks (Green-Left) party leader Jesse Klaver is on a mission to put his own stamp on the Dutch political landscape in the March 15 polls as an antidote to rising right-wing xenophobia. As the only child of an absentee father of Moroccan descent and a Dutch-Indonesian mother, Klaver, 30, knows what growing up in The Netherlands as an outsider is like. "I was shocked to be told on Twitter to go back to my own country, or told 'I will not vote for you because you are Moroccan'," Klaver said during a debate late Sunday.

"So many people have faced these kinds of comments. We should be judged based on what our future represents, not on the basis of our origins."

While far-right politician Geert Wilders campaigns on an anti-immigrant, anti-Islam platform including calling some Moroccans here "scum", Klaver is sending a message of tolerance.

Since taking over as party leader in May 2015, he has boosted his party's fortunes. Polls predict it may leap from six MPs in the outgoing parliament to possibly 18.

Although unlikely, some even give the bright-eyed Klaver an outside shot at becoming the next Dutch prime minister depending on how coalition talks go.

The country's youngest-ever party leader, Klaver was raised mainly by his grandparents in social housing, in a sprawling flatlands suburb of the southern city of Roosendaal.

Unlike "what certain politicians will lead you to believe, The Netherlands is an immigrant country," Klaver told AFP in a recent interview.

"I am a product of that immigration," added the curly-haired, olive-skinned Klaver.

His campaign mainly focuses on stopping what Klaver calls "the right-wing wind that's blowing through all of Europe".

And the Dutch vote is being seen as a key litmus test of the rise of populist and far-right parties ahead of other national elections in Europe this year.

Klaver first rose to prominence in 2009 when at just 23 he was elected the youngest-ever member of the influential Social and Economical Council of The Netherlands, which advises government and parliament on key policy.

Six years later, he was elected unopposed as the leader of GroenLinks, which had been haemorrhaging voters since a disastrous 2012 campaign.

With Prime Minister Mark Rutte's Liberal VVD party only slightly ahead of Wilders's Freedom Party in the polls, the young Klaver could emerge in a "kingmaker" role.

He has already called for closer cooperation between leftwing parties like Labour, the progressive D66 and the Socialist Party, seeking to form a powerful bloc against any potential government led by Rutte's Liberals, who will need a majority coalition to reign in the 150-seat house.

Even his full name, "Jesse Feras Klaver" echoes the initials of the famous US president, assassinated in Dallas in 1963.

Kennedy "was a man who said you should stand by your norms and principles," said Klaver, who has several pictures of a youthful Kennedy on his office walls alongside those of his own wife and two young sons.

But some of his critics are not impressed by his youthful assertiveness -- Labour Party leader Lodewijk Asscher has called him a "touch arrogant."

Klaver subscribes to many of the ideas of celebrated French economist Thomas Piketty -- the author of an unlikely bestseller on capitalism -- including that globalisation has created an unequal society and an unequal concentration of wealth.

"We need to make Europe work for everybody, not just for a small group of rich people who have been lucky and are just getting richer," Klaver said.

He is reminded every morning of his mission as he clasps his coffee mug, engraved with JFK's words: "One person can make a difference, and everyone should try."

(This story has not been edited by NDTV staff and is auto-generated from a syndicated feed.)
Comments
Jesse Feras KlaverDutch politicsDutch trudeau