Where PM Modi Could Be Just As Wrong As Nehru

A critical component of the myth-making around Indian Prime Minister Narendra Modi is to minimize the contribution of the country's foundational figures. None has suffered more than Jawaharlal Nehru, the man who laid down the rails on which the republic has run for 74 years. Which makes it surprising that Modi is emulating a signature Nehru policy and, paradoxically, one that failed: self-sufficiency. Why is a 21st-century leader borrowing a discredited 1940s idea that was given up in the 1990s?

The Harrow and Cambridge-educated Nehru, son of a wealthy lawyer, was an internationalist. But when it came to picking a developmental strategy, he never had much of a choice. Taking charge in 1947 of a newly independent nation ravaged by two centuries of British colonial plunder, he was forced to follow a closed-economy approach. For one thing, World War II had caused a huge global shortage in capital goods. The steel that could go into tractors had ended up in tanks. How to import any machines, or pay for them? Especially when India's export advantage in cotton and jute was lost after partition, to West and East Pakistan, now Bangladesh.

Nehru's other problem was the Soviets. By the mid-1950s, they had infiltrated the Indian planning process with their model of rapid, heavy industrialization. The idea of producing one's own steel to make machines to then manufacture bicycles was seductive, even if it meant not having enough trousers and toys, or shirts and shoes, to sell cheaply at home and globally and absorb surplus farm labor. This put India on a path of slower urbanization and growth than in East Asia's tiger economies.

Modi is approaching the problem from a different angle. A popular leader who came to politics on a platform of muscular nationalism, he dismantled Nehru's planning apparatus shortly after becoming prime minister in 2014. Modi had none of Nehru's class privileges. As a young boy, he helped his father sell tea at a small railway station in Gujarat, according to a 2013 biography. In his second five-year term as prime minister, Modi is relying on the same formula that won him success as chief minister of of Gujarat state: highly capital-intensive industrialization, supported by infrastructure and investor-friendly policies. 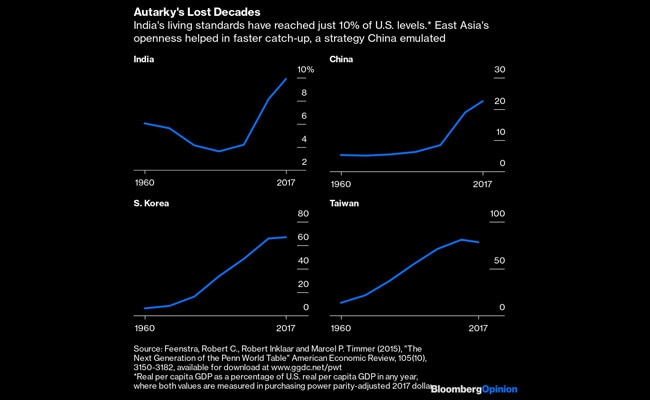 To turn India into a factory to the world, Modi has put together a five-year infrastructure project pipeline worth 111 trillion rupees ($1.5 trillion), more than what the country has invested in almost the previous two decades. He has slashed corporate tax rates, merged 29 labor codes into four, and announced $28 billion in production-linked fiscal incentives. The money is earmarked for firms that put up factories making everything from mobile phones and auto parts to solar panels and sportswear. If things go according to plan, this could bring investment worth as much as $37 billion over two to three years and boost wages by $55 billion annually, according to Crisil, an affiliate of S&P Global Inc. 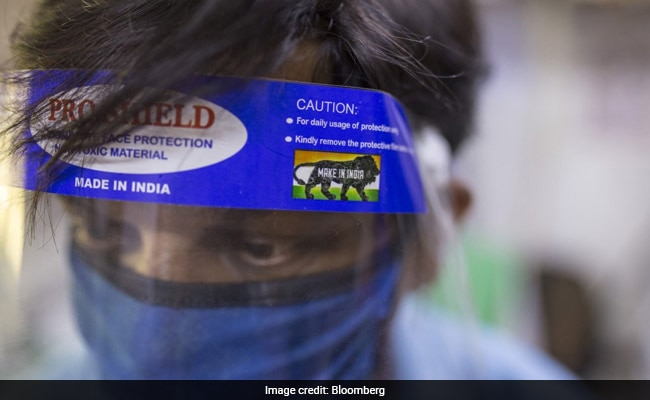 An employee at a Mumbai workshop. PM Modi wants to boost local manufacturing and reduce India's reliance on imports.

That's the good part, one that has a shot at success in the current climate. Rising U.S.-China tensions are forcing global firms to broaden their supply chains. Where Modi is going wrong - and repeating Nehru's mistake - is in choosing self-sufficiency over openness.

East Asian countries like Taiwan and South Korea recognized fairly early that labor-intensive manufacturing was their natural advantage. They played to it. India didn't. Nehru's heavy-industry approach failed to create employment for the huddled masses. Perhaps the Soviets wanted the consequences of their model to creep up on India and lead to collectivization of farming under pressure from a growing, restive population that wasn't really needed on the land but had few factory jobs to go to. Luckily for India, Nehru never went that far.

The economy started opening up in the 1990s. Industrial licensing went away, tariffs began to fall. Led by computer software, skills-based exports grew rapidly, Yet the blunder of not exploiting cheap, unskilled labor never really stopped mattering. India was teeming with 500 million people at the time of Nehru's death in 1964. Modi has to create jobs for a population of more than 1.3 billion that's bulging with young people - and youth underemployment.

The era of Covid-19 has spilled the long-festering problem, masked in recent years by the rise of an urban gig economy, into the open. With 75 million people pushed back into poverty, the middle class hollowed out and less than 6% employment for women in cities, there's no point in pretending that India has somehow made a giant leap from agriculture to software, and that it won't need to make shirts and shoes. 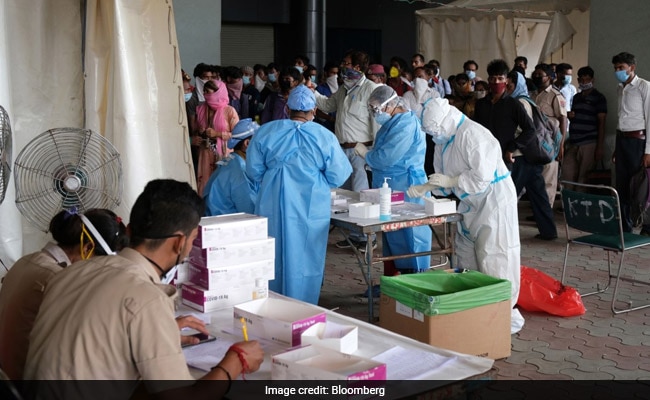 Covid-19 brought some harsh realities of India's economy into the open.

But to manufacture anything for the world, something needs to be imported. Take windbreakers. Indian suppliers appealed to the government for more than four years to remove the anti-dumping duty on purified terephthalic acid, a key raw material. It was pushing up costs across the value chain and making India uncompetitive in synthetic textiles. Finally, the duty went away last year. 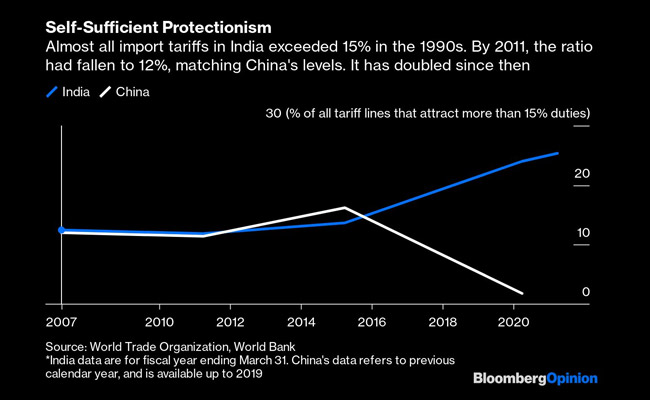 Other industries are less lucky. Even prominent trade economists like Arvind Panagariya, who served in the early years of the Modi regime and is sympathetic to its zeal to reform a few things, are dismayed by creeping protectionism. As the Columbia University professor noted in a recent lecture, the proportion of import tariff lines in India with rates exceeding 15% went past the one-quarter mark last year, more than double from a decade earlier. With tariffs on inputs being higher in many cases than the customs duty on finished goods, researchers ask if India will be able to replicate China's success with global assembly lines.

There is an opportunity for India to compete. Chinese manufacturers are raising prices, stoking global inflation fears. Washington wants a prosperous security partner in Asia to contain China's influence. No Soviet Gosplan experts are breathing down Modi's neck like they did in Nehru's days. So why is the current prime minister choosing autarky, and turning away from trade liberalization? 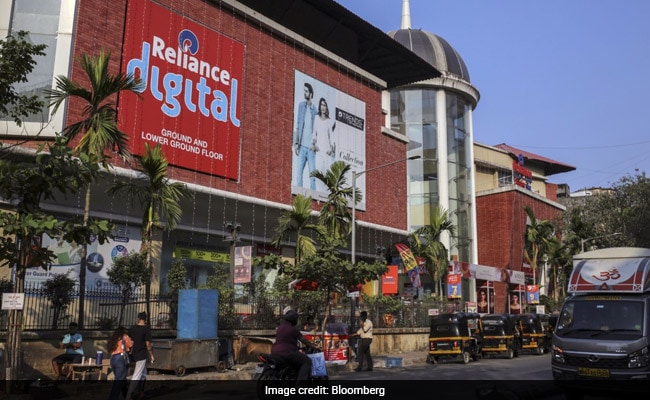 Maybe the domestic political economy is forcing Modi's hand. From steel to cement and autos, and from telecommunications to airports and seaports, economic power in India has concentrated sharply over the past several years. A monopolist likes the protection of tall import barriers. Modi is increasingly obliging. Yet if anything, now is the time India should be doubling down on the successes of the 1990s by broadening skills-heavy exports to include labor-intensive goods. On this measure, Vietnam and Bangladesh are doing better.

Modi may also evoke self-sufficiency to stave off India's over-dependence on China. The industries India is betting on, from telecom gear to photovoltaic cells and active pharmaceutical ingredients, all import heavily from the People's Republic. It's a vulnerability. Territorial tensions dating from Nehru's time remain a thorn in Modi's side even now.

The more Modi tries to relegate Nehru to the back pages of history, the more the first prime minister leaps out. That import substitution is the common ground between two such vastly different leaders and regimes is disturbing. By the late 1950s, Nehru had turned critical of the "disease of giganticism" unleashed by planning. Modi, too, needs to learn that self-sufficiency won't put food on the table. Only jobs will.